Vintage Jesus, Part 1: Is Jesus the Only God?

Jesus Christ today is the most extraordinary, the most loved and hated, the most widely considered person in all of human history. More songs have been sung to him, more paintings painted of him, and more books written about him, than anyone who has ever lived in the history of the world. 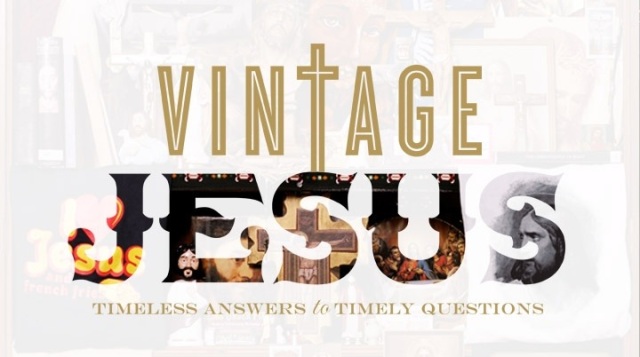 “Vintage Jesus” is a twelve-part sermon series given by Pastor Mark Driscoll of Mars Hill Church in Seattle in 2006. In 2007 the series was published as a book by Crossway, coauthored with Gerry Breshears. Because it covers the major questions people tend to ask about Jesus, I thought it a fitting series for this blog. As I move through each sermon video, I will be highlighting only a few main ideas, so please, watch the videos and/or read the book for a fuller treatment of the question “Who is Jesus?”

Disclaimer: Mark Driscoll has a polarizing personality. He’s orthodox in his theology but unorthodox in his preaching style, which is casual and contains humor that’s sometimes crass. (He uses slang expressions and likes to make fun of people.) Even though I don’t endorse everything he says or how he says it and am particularly turned off by his machismo, I have learned from his teachings over the years. He very clearly asserts and explains the evangelical perspective (or one of them, anyway) on a variety of issues and makes Christian history and theology interesting. Furthermore, he’s not afraid to preach parts of Scripture that offend our modern-day sensitivities, and for that I commend him.

The first sermon in the “Vintage Jesus” series addresses the question “Is Jesus God?”, and if so, “Is Jesus the only God?” Driscoll, of course, answers in the affirmative. He focuses on twelve different claims Jesus made during his earthly ministry, each one more extraordinary than the next, that differentiate him from all the other spiritual leaders in the history of the world. He demonstrates that Christians are narrow because Jesus was narrow; his claims to Godhood were singular, exclusive, and still remain unparalleled: I alone am perfect. I alone have the power to forgive sin, and the right to judge it. I alone am the way to heaven. And so on. No wonder they killed him!

Driscoll opens up with some Jesus-inspired quotes by pop culture icons and political and religious figures, ranging from Gandhi to Hitler to Pamela Anderson, but then he lets Jesus speak for himself. If you were a victim of slander, he points out, you’d want the opportunity to tell people who you really are and what you have and have not done and said and believe. We should afford to Jesus that kindness, he says, and so we turn to the Gospels. Some of you might object: How do we know that the four canonical Gospels accurately record what Jesus said and did? Couldn’t Christians have added those bits about Jesus’s divinity later on, for ideological reasons? This is a very good and important question, one on which there is a great breadth of scholarship, but I am going to save it for another series. For now, let’s just work from the assumption that the words attributed to Jesus in the canonical Gospels were really his own.

Back to the question at hand: Did Jesus ever claim to be God?

Here are some time markers:

4:44: The Jesus of popular culture

8:25: What do the world religions and cults say about Jesus?

12:06: What have well-known figures throughout history said about Jesus?

14:29: What does Jesus say about himself? He says, “I am the only God.” He said this in at least twelve different ways:

Here are some key ideas from the video.

All religions are not the same because all religions do not teach the same thing about Jesus. Only Christianity teaches that Jesus is God. (8:30)

The Jewish Scriptures say that God appeared to Abraham and told him that he would bless him with as many descendants as there are stars, and would make him into a great nation. Engraving by German artist Julius Schnorr von Carolsfeld (1794-1872), from “Bibel in Bildern” (1851-60). 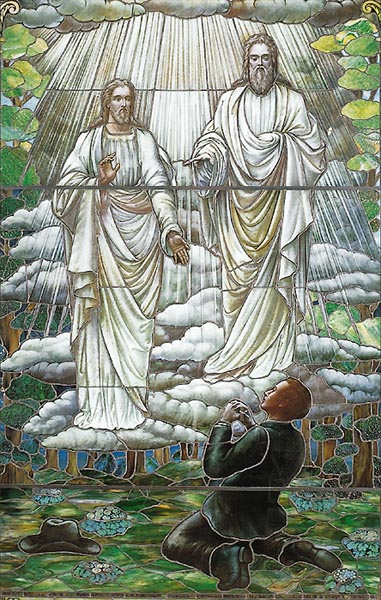 In Joseph Smith’s first vision, two “personages” (presumably Jesus and Yahweh) appeared to him and told him not to join any existing churches because all of them taught false doctrines. Stained glass window completed in 1913 by an unknown artist, on display at the Museum of Church History and Art in Salt Lake City, Utah.

Ten years after having received his first revelation from the angel Gabriel, Muhammad undertook his famous Night Journey, in which he rode up to heaven on a mythical steed to meet Allah. Illustration of the Mi’raj from the Khamseh, probably created by the court painter Sultan Muhammad in 1543. Opaque watercolor and ink on paper, 7.3 x 11.3 in. (18.6 x 28.7 cm).

If Jesus is not God, then he is one of the most evil men in history. (46:16, 57:27) “If Jesus is telling people that their sins can be forgiven and they can’t be forgiven, and people are dying in hope and faith, trusting in him, and he’s a liar, then he’s really not a good man; he’s an evil man.  He’s a conman. . . . And all the people today—a few billion on Earth—who pray to him are not praying to a good man who told us nice things. If he’s not God, we are wasting our time and wasting our breath and wasting our hope, and Jesus Christ is a despicable and deplorable and disgusting person, who has pulled the biggest con in the history of the world.”

I am trying here to prevent anyone saying the really foolish thing that people often say about Him: I’m ready to accept Jesus as a great moral teacher, but I don’t accept his claim to be God. That is the one thing we must not say. A man who was merely a man and said the sort of things Jesus said would not be a great moral teacher. He would either be a lunatic—on the level with the man who says he is a poached egg—or else he would be the Devil of Hell. You must make your choice. Either this man was, and is, the Son of God, or else a madman or something worse. You can shut him up for a fool, you can spit at him and kill him as a demon or you can fall at his feet and call him Lord and God, but let us not come with any patronising nonsense about his being a great human teacher. He has not left that open to us. He did not intend to. . . . Now it seems to me obvious that He was neither a lunatic nor a fiend: and consequently, however strange or terrifying or unlikely it may seem, I have to accept the view that He was and is God.

Jesus was either a lunatic, a liar, or Lord—those are our only three options, Lewis says. If you don’t buy into the “Lord” option, then the only possible explanations of why Jesus claimed to be Lord when he really wasn’t are that either (1) he was lying, or (2) he really thought that he was—he was crazy. Since what we know of his character is not consistent with either charge (liar or lunatic), “Lord” seems the only logical choice for us to make regarding his identity.

“Since Jesus said he is the only God, it is inconceivable that one simultaneously could be a faithful follower of Jesus and a practicing devotee of any religion but Christianity.”

Jesus wasn’t killed because he fed homeless guys and told cute stories; he was killed because he claimed to be God. (52:11) Jesus was executed on charges of blasphemy. Everyone understood his claims unambiguously. For example, his statement “I and my Father are one” was not taken in the abstract sense to signify merely a unity of purpose or mission—no, his hearers understood exactly what he was saying, for in response “they picked up stones to stone him” (John 10:30-31). When Jesus asked what crime they wanted to stone him for, they said, “for blasphemy, because you, a mere man, claim to be God.”

When he called himself the “Son of Man,” he was not referencing the fact that he was human, but on the contrary—that he was divine. Six hundred years before the birth of Jesus, Daniel saw a vision of the “Son of Man”—a title that Jesus used for himself on several occasions. This “Son of Man” was given authority, glory, and sovereign power—all attributes of God—and all peoples and nations worshipped him. The Jews instantly made this association . . . and they picked up stones to stone him.

When on another occasion Jesus said that “before Abraham was, I am,” the Jews again picked up stones to stone him (John 8:58-59), because they knew it as a reference to God’s revelation of himself to Moses in the burning bush by the same name—“I am.”

And these are just three examples.

Jesus clearly said he was God. What do you say, and why?

I shared this video with my small group last year, and these are some of the questions we discussed in relation to it: Why is Jesus so famous? What makes him different from other spiritual teachers? What did people think of him in his own day? Has public opinion changed at all since then? What aspects of his character do people tend to embrace these days? Ignore? What was I taught about Jesus as a child? How have my views of him changed since then, if at all?

If you value this conversation, keep it going in the comment field below!

This entry was posted in Books, Pop Culture, Theology, Who is Jesus? and tagged exclusivity of Christianity, is jesus the only way?, mark driscoll, mars hill church. Bookmark the permalink.

11 Responses to Vintage Jesus, Part 1: Is Jesus the Only God?