Click here to watch the sermon “How Human Was Jesus?”

Traditional Christian creeds hold in tension the two truths that Jesus was both fully God and fully man. We must not prefer either truth over the other but maintain both vigorously. This is the most controversial and confusing teaching in all of Christianity, and it has resulted in many church splits throughout history. The groups deemed heretical (at least in part) because of their misunderstanding of this doctrine are the Docetists, Gnostics, Monophysitists, Eutychians, Ebionites, Nestorians, modalists, monarchianists, Sabellianists, Unitarians, Arians, Jehovah’s Witnesses, Mormons, Adoptionists, Kenotics, and Apollonarians.

In the last sermon we considered the divinity of Jesus. Here we are going to consider his humanity.

Like all humans, Jesus went through puberty, got hungry and thirsty, asked questions, got stressed out, and showed a range of emotions. He had a mom, a dad, and several siblings, whom he probably didn’t get along with all the time. He needed to fight temptation. He needed to work on his relationships. And no, he didn’t wear a halo.

Using forensic anthropology, British scientists, assisted by Israeli archeologists, recreated what they believe is the most accurate image of the face of Jesus. Made for the BBC program “Son of God” in 2001. 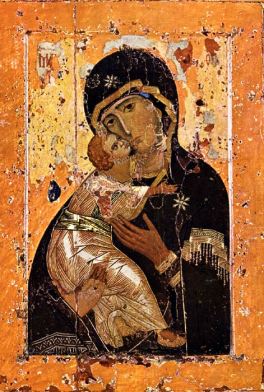 52:47: Invitation: Be astonished by the humanity of Jesus—the man of laughter, man of sorrows, man of passion, man of sobriety.

This entry was posted in Western Art, Who is Jesus? and tagged emotions of jesus, humanity of christ, hypostatic union, jesus in byzantine art, madonna and child. Bookmark the permalink.

1 Response to Vintage Jesus, Part 2: How Human Was Jesus?