This is part 5 of a series on Christian art of the Pacific Northwest Coast. Read part 1 here. 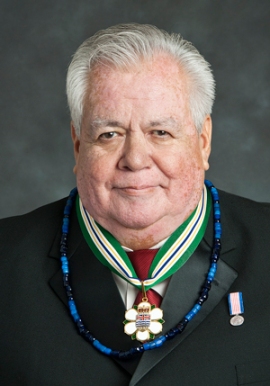 In recognition of his extraordinary artistic contributions to the province, in 2010, Tony Hunt was invested into the Order of British Columbia.

Chief Tony Hunt is the hereditary chief of the KwaGulth people of Fort Rupert and Kingcome Inlet, British Columbia, and a master carver. At age 12, he started training in woodcarving with his maternal grandfather, the legendary Chief Mungo Martin, who is probably most well known for building the traditional Kwakwaka’wakw “big house” in Thunderbird Park in Victoria, BC.

Hunt has designed more than 100 full-scale totem poles—more than any other First Nations artist—which are exhibited in countries throughout the world, including Mexico, England, Greece, New Zealand, China, Japan, and, of course, his native Canada. (The largest concentration of his totem poles is found in Thunderbird Park.) He also designed the Hunt Family Big House inside the Royal BC Museum and the KwaGulth ceremonial Big House at Fort Rupert, the largest traditional native structure ever built in the Pacific Northwest.

Hunt works in two dimensions as well, as shown by the serigraph below.

Like the Totem Cross by Stanley Peters, this work was commissioned by the Canadian Conference of Catholic Bishops in 1975. The original design is carved and painted on a red cedar panel measuring 152.2 x 90.9 x 4.9 cm.

A few weeks ago I pulled the following description from an eBay page selling an edition of the print that now appears to have been taken down. I’m not sure whether this description was written by the artist or the vendor.

John the Baptist is depicted as a shaman wearing a chilkat cloak and he holds a Raven rattle which signifies his status among other chiefs. On the cloak is depicted a sisiutl, a mythical being with a head at each end of its body and a head in the middle of its torso. Also shown on the cloak is a ceremonial cedar chest of the type used by the shaman to store his regalia.

Christ is shown as a young chief wearing red cedar bark regalia, kneeling at the feet of John. A dove is shown coming down from heaven as a Thunderbird in its half-human and half-mythical form. The Thunderbird is all-powerful and is associated with the creation myth.

In Northwest Coast culture, chiefs are chosen based on their power and prestige. They are responsible for providing for the people in their lineage—for distributing wealth among them. Here Jesus is being installed as chief by the village shaman (John the Baptist), indicating his high rank and suggesting his commitment to lead and preserve his people. A fitting contextualization, I feel, of Christ’s baptism, which is traditionally understood to be his public inauguration into the ministry.

Notice the Trinity of Father (Sun), Son (Chief), and Holy Spirit (Thunderbird). The Father beams down on his only begotten, in whom he is well pleased, and the Spirit hovers over the scene—not as a dove, but as the mighty Thunderbird of Kwakwaka’wakw myth. These spiritual presences are called down by John, who raises his ceremonial rattle (instead of the scallop shell typical in Western art) and shakes it as he sings.

Hunt is not a Christian but said (in his artist’s statement) that he was happy to carry out this commission, because he wanted to show that spiritual harmony can exist between people of diverse cultural traditions and religions. “Although our cultures differ,” he said, “within both traditions there appears a creator and ‘historic’ figures who have dedicated themselves to the spiritual and secular well-being of mankind.”

Hunt therefore sees Jesus as one who was dedicated to the good of others.

Of the five featured artworks we’ve looked at thus far, Baptism Mural is the most stylized. In the 1965 book Northwest Coast Indian Art: An Analysis of Form (considered by scholars to be the definitive resource on the topic), Bill Holm identifies and gives names to the three basic design elements of Northwest Coast art, all of which are demonstrated in this print.

If you are interested in learning more about Northwest Coast design, I recommend Hilary Stewart’s Looking at Indian Art of the Northwest Coast (Vancouver/Seattle: Douglas & McIntyre/University of Washington, 1979). It’s a very concise, accessible, well-illustrated volume—only 111 pages, with (B&W) images on almost every page. You can read an excerpt here. 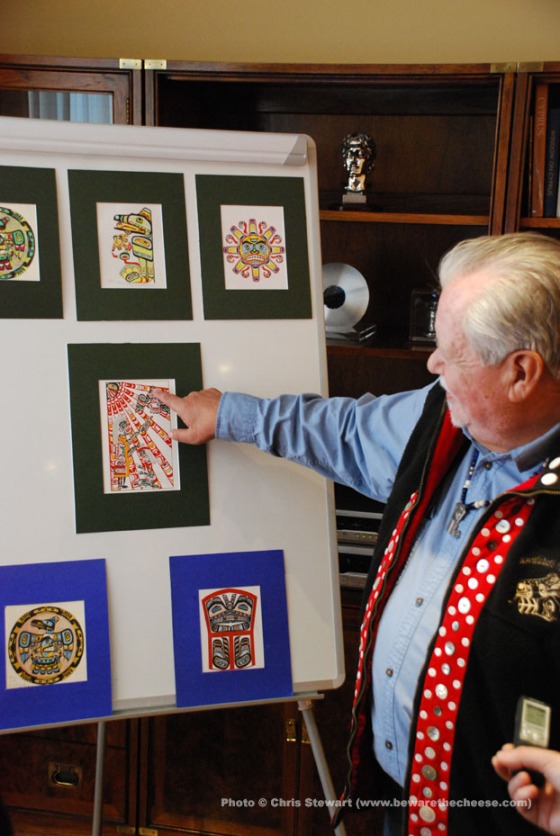 In January 2012, Hunt visited Athens, Greece, at the invitation of Canadian Ambassador Robert Peck to assess the damage of a totem pole he had carved in the 1960s, which stands outside the ambassador’s residence. He took the opportunity to share with Peck some of his other work. Photo © Chris Stewart, http://www.bewarethecheese.com.

2 Responses to Jesus as Chief: “Baptism Mural” by Tony Hunt