Jesus as Thunderbird: A Totem Pole-Crucifix by Stanley Peters

This is part 2 of a series on Christian art of the Pacific Northwest Coast. Read part 1 here. 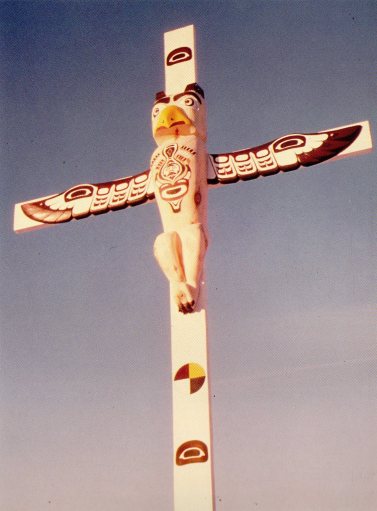 In 1975 the Canadian Conference of Catholic Bishops commissioned twenty artists from across Canada, eight of whom were First Nations artists, to create works that would convey the Christian message. (See a sampling here.) Stanley Peters of Whitehorse, Yukon Territory, an Athapaskan of Tlingit origin, chose to represent Christ on the cross—as a Thunderbird.

In Northwest Coast culture, Thunderbird is known as a strong and powerful protector and the personification of “chief.” A messenger of the Great Spirit, he shoots thunder from his wings and lightning from his eyes. He rules majestically from the mountaintops, keeping watch over all.

This association appropriately evokes the triumph of the cross. Christ-as-Thunderbird extends his wings as a statement of power. He is the Messiah, come to establish kingdom rule on earth. He came with fearsome words against sin and hypocrisy but also offering care and protection to those who place themselves under it.

Peters wrote the following description of his work:

God’s eyes [represented by the black ovoids] watch from the four directions, from above and below, from both wings, saying that God is all around us at all times. All races, black and yellow, red and white, are represented in the four colours taken from nature and found in the earth-circle [on the vertical beam] and all over Thunderbird. Christ-as-Thunderbird, in dying for us, restores happiness and understanding; he fills us with new dignity and great richness.

The figure on Thunderbird’s chest appears to be that of a man—probably another evocation of Christ himself, as his arms are outstretched in the cruciform position, and his face expresses pain. It’s quite common for Northwest Coast artists to depict one figure inside another, a reminder of the interconnectedness of all life.

Thunderbird can be identified in Northwest Coast art by the curled appendages on the top of his head and his sharply curved upper beak, which is similar to that of Hawk’s. He is almost always depicted with his wings outstretched, and sometimes with his claws in the back of a whale, an animal he is fond of eating.

A smaller-scaled replica of Peters’s Totem Cross is on display at the Musée des religions du monde in Quebec.

4 Responses to Jesus as Thunderbird: A Totem Pole-Crucifix by Stanley Peters