Greg Boyd’s description of the church’s marital engagement to Christ on pages 121–26 of his book Benefit of the Doubt is one of the best I’ve read. Under the heading “Betrothed to the Beloved,” he explicates the meaning of the new covenant in terms of marriage, using ample scripture references from both Testaments. To illuminate the analogy, he describes in detail ancient Jewish marriage practices, comparing the church’s two main sacraments to two such customs: baptism as our betrothal ceremony, and communion as our betrothal feast.

Engagement was taken much more seriously in ancient Israelite culture than it is today in the West, where it is easily gotten into and out of. Boyd writes that in ancient Jewish marriages a couple was legally married for a year or two before they had a wedding and became fully married, at which point they consummated their marriage through sexual intercourse. The liminal space between the initial ceremony to declare the engagement and the definitive marriage ceremony, with the most magnificent feast to follow, was known as the betrothal period. This is the period the church is in now: we know our beloved, but not fully; we anticipate our life together, but this, here, is not quite it.

As did those Israelite fiancés, Jesus has gone away to prepare a home for us (John 14:1–3), and in the meantime he has left us with a betrothal gift, a promissory pledge that he will return: his Holy Spirit. As we wait to consummate our marriage with him—to enter into that “one flesh” relationship—we are to be readying ourselves to be a wife worthy of him. 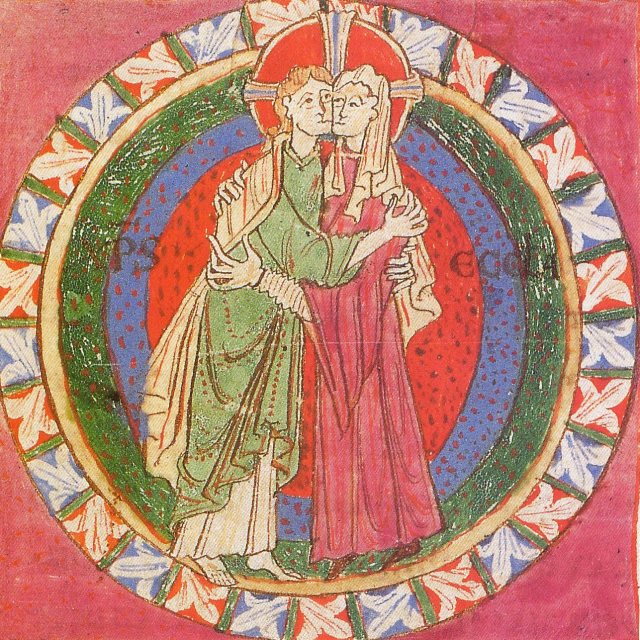 Christ and the Church, from The Alardus Bible, ca. 1097, held in the Bibliotheque Valenciennes, France.

Boyd spends so much time teasing out this analogy because he believes Christians dangerously overemphasize the Bible’s legal imagery when it comes to articulating the message of salvation. Conceiving of Christ as a judge who has acquitted us of our crimes has different implications than conceiving of him as our soon-to-be spouse—a relationship characterized by mutual longing and commitment. The Bible does use both images, but the latter much more pervasively, Boyd argues:

This, folks, is what it means to be “saved.” When we place our trust in Christ and pledge our life to him, we are saying, “I do!” to his marriage proposal, offered to us on the cross. We are made members of his corporate bride who is destined to share in the love of the Triune God throughout eternity and to co-rule with her husband in the age to come. We won’t consummate this marriage until Jesus returns to establish God’s kingdom on earth in its fullness, but until this time we aren’t to merely be waiting around for this to happen. No, in this betrothal period, we’re to be learning how to be the faithful, radiant bride Jesus came to redeem. . . .

How impoverished the acquittal concept of salvation looks by comparison! This is why the way that the New Testament talks about salvation is so different from the way contemporary Christians tend to talk. Christians today typically talk about salvation in the past tense. “When were you saved?” I often hear people ask. But the New Testament talks about it in three tenses: we were saved (e.g., Rom. 8:24; Eph. 2:5), we’re being saved (1 Cor. 1:18; 2 Cor. 2:15), and we shall be saved when the Lord brings this age to a close and sets up the full reign of God (Rom. 5:10; 1 Cor. 3:15).

This makes no sense if you think of salvation as a contract, but it makes perfect sense once you realize that salvation is about our marriage to Christ. We were saved when we initially responded to Christ’s proposal, made on the cross, by saying, “I do,” as we pledged our life to him. We are being saved as we learn how to yield to the abundant life of God abiding within us and as we are being transformed into the radiant bride Jesus is coming back for. And we shall be saved, in the fullest sense of the word, when he returns and we appear with him “in glory” (Col. 3:4). At this time, John declares, we will finally “see him as he is,” for “we will be like him” (1 John 3:1–3).

This entry was posted in Theology and tagged betrothed to christ, bride of christ, gregory boyd, marriage supper of the lamb. Bookmark the permalink.

2 Responses to Jesus, the church’s fiancé