God in the Modern Wing: Matthew Milliner on Chagall, Magritte, and Dalí

Theologian and art collector G. Walter Hansen has organized a four-part series of lectures this month titled “God in the Modern Wing.” Taking place each Sunday at Fourth Presbyterian Church in Chicago, and free to the public, it aims to explore the spiritual significance of the modern and contemporary art one can encounter at the famous Art Institute of Chicago.

The November 8 lecture—which I highly commend to you—was given by Matthew Milliner, assistant professor of art history at Wheaton College. In it he covers Marc Chagall (one of my favorite artists, and apparently the pope’s as well!), Renée Magritte, and Salvador Dalí.

Here is an outline of the talk.

13:00: Marc Chagall: influence of Russian icons; twentieth-century religious persecution and Christ as the supreme Jewish martyr; the fiddler on the roof; commentary on The Praying Jew | Dedicated to Christ | White Crucifixion | The Crucified | Descent from the Cross | Resistance, Resurrection, Liberation

31:17: Renée Magritte: from trompe l’oeil (trick of the eye) to trompe l’esprit (trick of the spirit); selfie culture; Constantine V and Theodore the Studite on iconoclasm; the hopeful Magritte; commentary on The Lovers II | On the Threshold of Liberty | The Human Condition | The Treachy of Images | The Freedom of Worship | The Tune and Also the Words | The Maimed | The Fair Captive | Favorable Omens

41:28: Salvador Dalí: from atheist to mystic; the Nicene Creed using Dalí images; the hypercube as a symbol of the Incarnation; commentary on Venus de Milo with Drawers and Visions of Eternity (in conversation with his Divine Comedy series) | Invention of the Monsters | Geopoliticus Child Watching the Birth of the New Man | Temptation of Saint Anthony | Christ of St. John of the Cross

Milliner makes a lot of great connections in his talk, but most revelatory to me was his use of Magritte’s Treachery of Images as a response to the iconoclastic controversies that have beset the history of the church (see 37:34). He takes up the famous painting of the pipe that bears the inscription “This is not a pipe” to teach Christians how to look at paintings of Jesus. 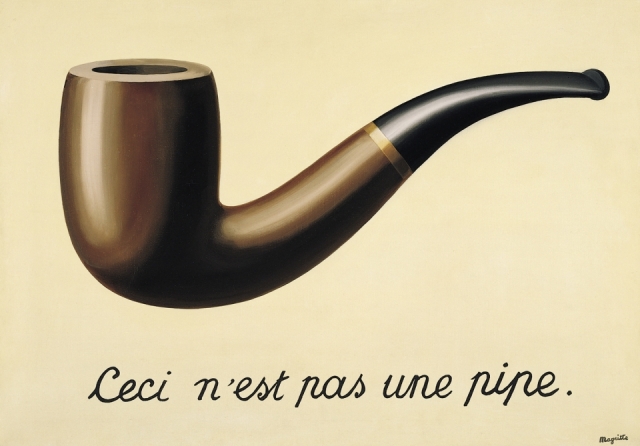 Renée Magritte, The Treachery of Images (This is not a pipe), 1948. Oil on canvas.

The point of Magritte’s painting was not to be cheeky; it was to make viewers realize that pictures can only represent a thing—they are not the thing itself. The pipe in Magritte’s painting is not a pipe; it is an image of a pipe, one artist’s interpretation of pipeness.

In the same sense, paintings of Jesus are not Jesus himself; they (usually) aim to represent his composite person—human and divine—but they can only ever indirectly reflect him. To illustrate, let’s apply Magritte’s catchphrase to a few different images of Jesus: 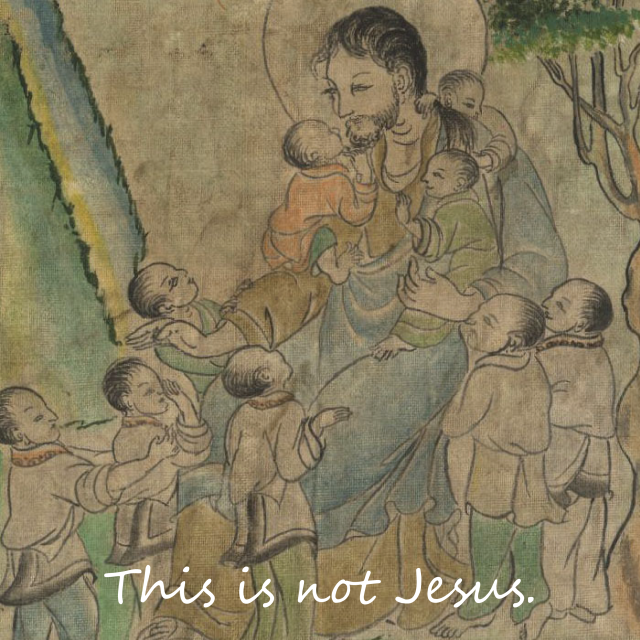 People will always find something to object to when it comes to images of Jesus: his skin is too light (or too dark); that’s too sentimental (or not sentimental enough); he looks too sad (or too happy); he’s too ugly (or too pretty). If it’s a Crucifixion image, some would object, “But he’s not on the cross anymore.” If it’s a Resurrection image, some would object, “But that glosses over the suffering of the cross.” This is why it is absolutely integral for us to have a wide variety of Jesus pictures stored up in our mental image bank—taken together, perhaps they can tell the full story of who he is and what he’s done, can portray all his myriad qualities. I am ever grateful to artists who open me up to new images of Jesus, images that I wouldn’t have been able to conceive or access on my own.

Magritte understood the power of images to deceive; it was this very deception that he fought against with his art. Iconoclasts too worry about the deceptiveness of images. But if we could just understand that an image is merely a sign that points to the reality—and that visual artists, like poets, often employ figurative language—maybe we wouldn’t have such a hard time embracing images of Christ, which have the potential to pass on wisdom to us, if only we would take time to gaze.

This entry was posted in Western Art and tagged CIVA lecture, dali religious art, magritte and iconoclasm, marc chagall jesus, modern art and christianity, this is not a pipe. Bookmark the permalink.

1 Response to God in the Modern Wing: Matthew Milliner on Chagall, Magritte, and Dalí