Last week we looked at the subject of the Madonna and Child translated into a Māori idiom. Today we’ll look at artistic depictions of Jesus as a full-grown adult Māori.

Māori Jesus by Sofia Minson—a New Zealand painter of Māori, Swedish, English, and Irish descent—depicts Jesus with a full-face moko (tattoo) and a pōhoi (ear and neck ornament) made from the skin of the native but now extinct huia bird. 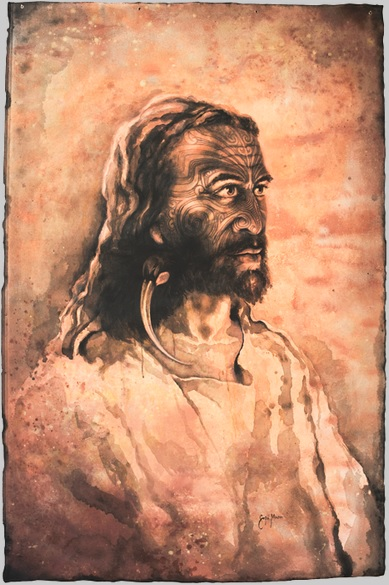 In Māori culture, tattooing is a way to loudly declare who you are. This aspect underlies tattooing in most cultures, but whereas tattoos are many times chosen in the West simply for the attractiveness of their design or to promote some kind of vague philosophical ideal (like “Peace,” or “Love,” or “Be yourself”), in Māori culture the moko—traditionally—communicates specific information about the wearer’s lineage, tribe, occupation, rank, and exploits. Every moko is unique to the individual and tells about his or her life and history.

According to an enlightening Q&A on www.media.newzealand.com, “A moko on the face is the ultimate statement of one’s identity as a Māori,” as the head is believed to be the most sacred part of the body. To wear the moko on the face is a bold move that bespeaks your pride of self and heritage, because think about it: wherever you go, your face is the one part of your body that is likely to always be on view.

I’m not sure how to read the moko on Jesus’s face—that is, I don’t speak the language of Māori tattoo. But I can imagine it contains much of the genealogical information recorded in Matthew 1, telling how Jesus descended from Abraham, Isaac, and Jacob, through the royal line of David, and how he was born of the Virgin Mary. It likely proclaims his role as messiah, his relationship to the other two persons of the Trinity, his preaching prowess, and some of the miracles he performed. (Whether there is a Māori design vocabulary to articulate such things, I don’t know!)

Three artists bore influence on Minson’s painting. The first two are the nineteenth-century painters C. F. Goldie and Gottfried Lindauer, who specialized in portraits of Māori—especially chiefs and dignitaries—in oils on canvas. (You can see, for example, a precedent for wearing a huia bird in this fashion in Lindauer’s painting of Tukukino.) Like Goldie and Lindauer, Minson has frequently turned to contemporary Māori as subjects for her paintings, with the aim of recording certain tangible aspects of their culture and presenting them in all their dignity to the world. But unlike her artistic predecessors, who believed the Māori were a dying race, Minson shows them as a vibrant and evolving people.

The other artist is Warner Sallman, whose 1940 painting Head of Christ cemented the image of Jesus as a meek and mild white American in the minds of millions. Minson took this ubiquitous image as her starting point but made significant modifications in giving Jesus the physiognomy of a Māori: dark skin, dark hair, a flat nose, and full lips. She also makes him more masculine, with a bigger build and harder features. Māori Jesus challenges the popular conception of what Jesus looked like—not by suggesting that the historical Jesus was actually Māori but by raising awareness of how all cultures contextualize him. Sallman imaged forth a Jesus for white Protestant America, and now Minson has done it for her own people—all those indigenous New Zealanders who have lacked a photorealistic image of Christ in their own ethnicity, until now.

St. Faith’s Anglican Church was the first church to be established in the Rotorua region of New Zealand, dating back to 1885. As it serves a mixed population of pakeha and Māori, its interior decoration program draws on both European and indigenous art traditions.

Its Galilee Chapel is designed to look like the interior of a chief’s house. The room features an etched glass window depicting Jesus dressed in a korowai (tasseled cloak) with a tāniko border, bearing a regalness much becoming a Māori chief. Lake Rotorua is visible just outside the window, so from inside the church, depending on your vantage point, it appears as if Jesus is either walking on the surface of the water or has just stepped off and is approaching you. 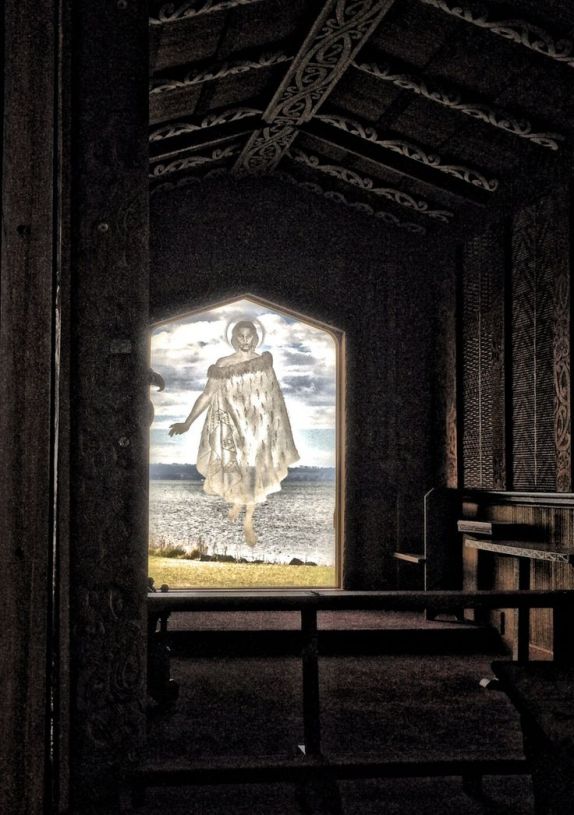 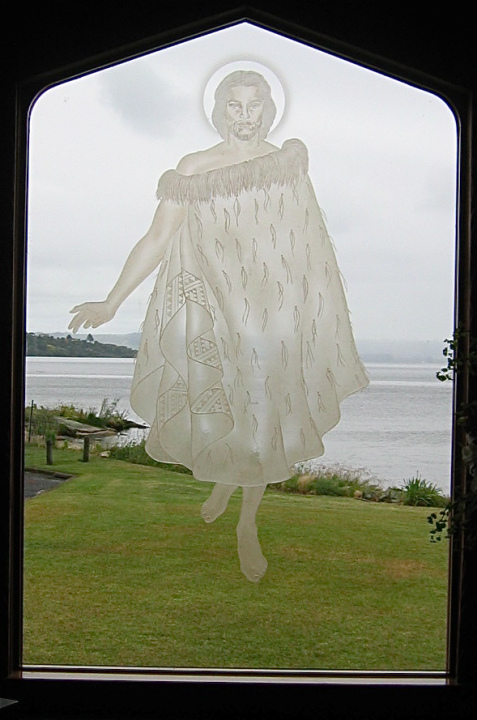 Though I went down many avenues to track down the name of the artist, I had no success; the church itself was not responsive. If you happen to know the answer or have any connections that could help me out, please do share. I was also not able to confirm the date of installation, but I’m fairly certain it was part of the church expansion of 1965–67; a photo of the window appears in a 1969 booklet, so it has to at least predate that. Judging by the style and the medium itself, my guess is that the artist was not Māori.

In his discussion of this window, blogger Ted Schroder points out a passage from Emil Brunner’s 1934 book The Mediator that puts forward a relevant theological conception—that of Christ as a window that the light of God penetrates:

Jesus Christ is the window through which we can see God. When the Christian message says with emphasis, “Look to Christ,” it does not mean “look away from God,” but “look away to God where God really is,” for if God is contemplated apart from Christ, if Christ is ignored, then God is not seen as He really is. Zeal for Christ is zeal for the true God. . . . Christ is really simply the window through which “the eternal Light streams in”; this is His significance, and His alone. (401)

Another New Zealand church that houses a Māori representation of Jesus—three, in fact, counting the previously discussed Tangiwai by Julia Lynch—is St. Joseph’s Church in the village of Jerusalem (or Hiruharama, as the Māori call it). The carved altar frontispiece centrally features a head of Christ crowned with thorns and wearing a full-face moko—sort of a reductive Ecce homo image. His eyes are made with pāua (abalone) shells, which gaze on us with a deeply sad gleam. 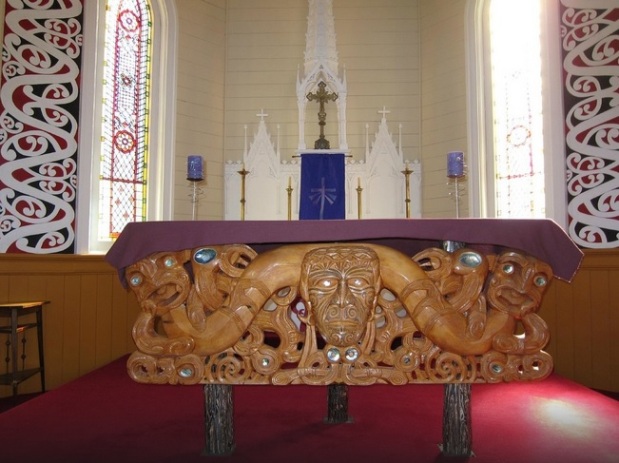 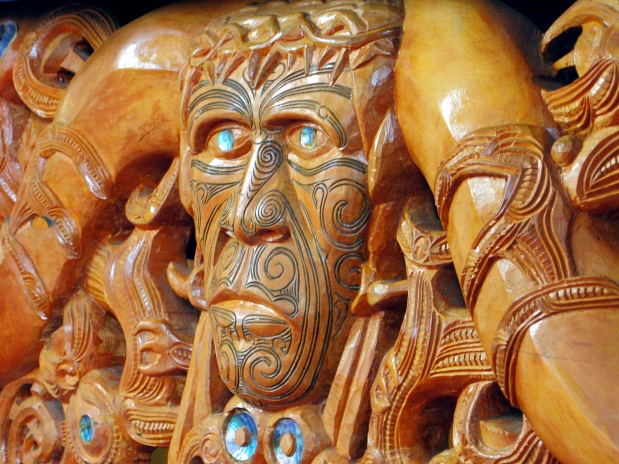 Christ with His Cross

I was hopeful to receive some interpretive aid for this piece, but unfortunately my lead fell through. I was wondering whether there’s any precedent for this kind of stylization in Māori culture—or rather, if it’s due mainly to the artist’s creative imagination. It does have a very modern look. Some other questions I have: What are the things at the tips of Jesus’s hair? What is the implement he’s holding? Is the expression on his face one of anger or pain? If you have any ideas or definitive answers, please do share them below! 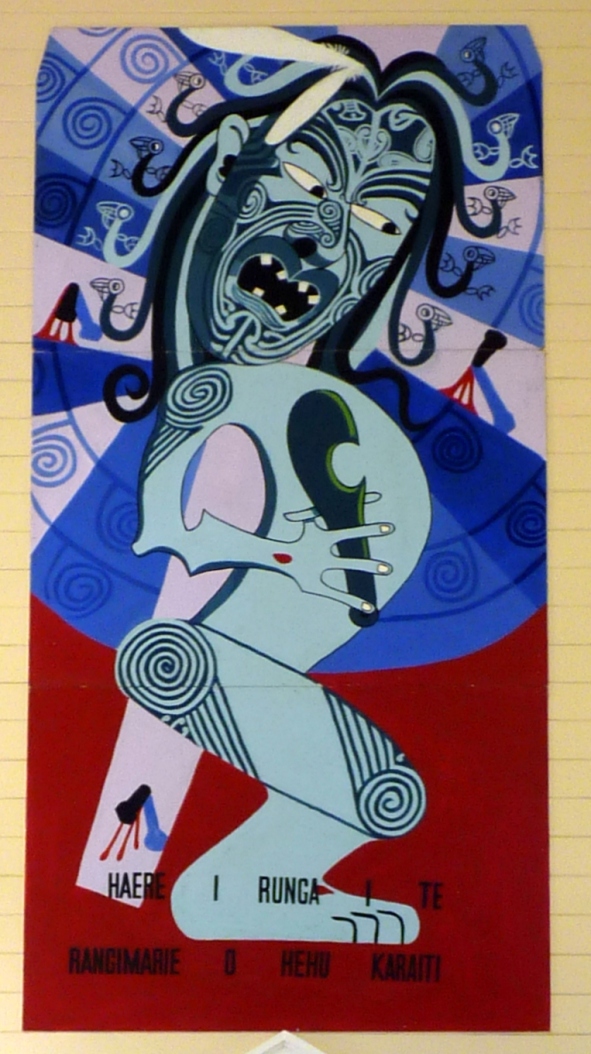 The figure is identifiable as Jesus because of the bloody wound on his wrist and the three nails that are pinned to different extremities of an abstracted cross. He is shown as Māori, with feathers in his hair and moko on his face, upper arm, buttocks, and thigh. A chaos of spirals and light-beams circles around him as he groans loudly, laboring to bring to birth the new creation.

I’m not sure whether this picture is supposed to represent the Crucifixion (or some other stage of the Passion) or the Resurrection; I tend toward the former, but then again, it could be representing both at once, as one unified event, as there is precedence for this in Christian iconography. Because of the semiabstract style, it’s hard to tell whether Jesus is carrying the cross or has broken free from it. If you read his face as anguished, then you could say this is the second Station of the Cross—Jesus taking up his cross, making his way to Calvary. But if you read his face as wrathful, perhaps the image is meant to reference the Harrowing of Hell, in which Christ militantly stormed its gates and issued a preliminary defeat of Satan. (The Harrowing is the canonical image of the Resurrection in the Orthodox Church.) Again, it’s possible it’s not meant to be an either/or.

The inscription under Jesus’s foot reads, HAERE I RUNGA I TE RANGIMARIE O HEHU KARAITI: “Go in the peace of Jesus Christ,” or “The peace of Jesus Christ be with you.” An odd choice, given the decidedly nonpeaceful appearance of Christ’s face! However, Christians know that Christ’s suffering, and his trampling of death and sin, were necessary to grant us the peace we enjoy in him today. This popular Christian benediction is well placed above the church’s exit door, reminding parishioners that as they go out and encounter all manner of assault against their spirits throughout the week, they have, through Christ, eternal security and rest. 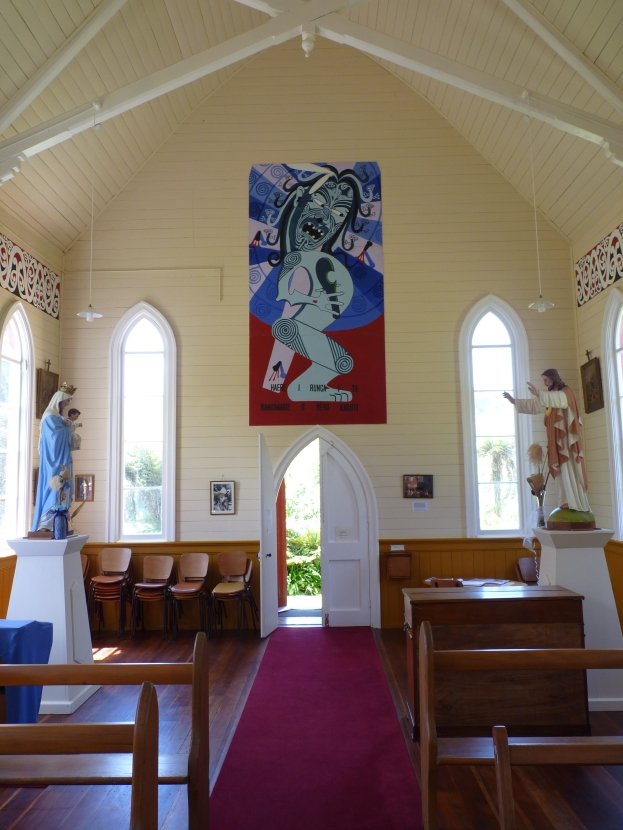 Would love to know the artist and year of this painting . . .

The Church of St. Werenfried in Lake Taupo features a more straightforward image of the Resurrected Christ by Dutch artist Martin Roestenburg (1909–1966). Robed and haloed, he holds his palms out to show us the wounds that bought our redemption. His heart, staked through with a cross, burns with love, and light breaks out all around him in myriad colors. The inscription at the bottom reads, E TE NGAKAU TAPU O HEHU, “The Sacred Heart of Jesus.” 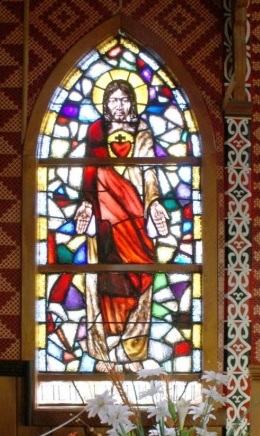 Though the dress of this Jesus figure doesn’t appear to me to be particularly Māori, his darker features suggest that he is ethnically so. Plus, he is shown opposite an unmistakably Māori Mary, discussed in the previous post.

Other relevant artistic depictions I did not cover include Julia Lynch’s The Maori Christ and The Risen Christ and John Stuart’s Kingitanga. I’m also aware of a contextualized Christian carving in St. Michael’s Church in Palmerston North, which is photographed and described in the March 1985 issue of Image: Christ and Art in Asia.

Furthermore, the secretary at the Cathedral of the Sacred Heart in Wellington sent me a scanned copy of the brochure from a 1999 exhibition it hosted of Māori Christian art. In it you can find photos of liturgical vestments and objects, as well as the two Lynch paintings listed above.

And lastly, as you will surely discover if you google “Maori Jesus,” the celebrated poet James K. Baxter wrote a provocative poem on the topic, which tells the story of a dungaree-wearing, fishy-smelling Jesus who calls his disciples from among the down and out of New Zealand and then eventually gets lobotomized for proclaiming, “I am the Light in the Void.” 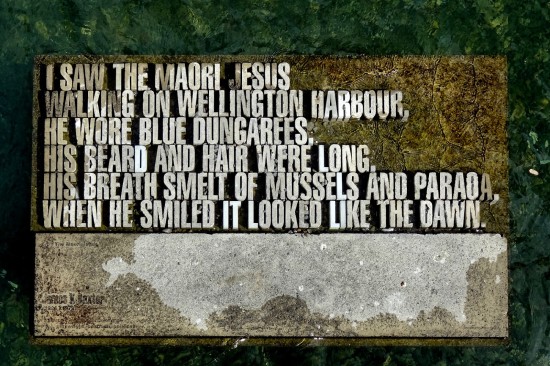 Text sculpture by Catherine Griffiths. Part of the Wellington Writers Walk along the Wellington waterfront in New Zealand. Excerpt from the poem “The Maori Jesus” by James K. Baxter.

6 Responses to Hehu Karaiti: Jesus Christ of the Māori