Artists who are Christian need not confine themselves to depictions of biblical characters and narrative, but because that is where my particular interests lie as an art viewer and blogger, that is what I am most on the lookout for: artists (whether Christian or not) with large bodies of work directly inspired by the Bible. As I discover such artists from the present era, I add their name to the Artists tab at the top of this website. I plan on one day reaching out to all of them—or their estates, if deceased—as I seek to create an online biblical art gallery.

Lately I’ve been announcing these additions through The Jesus Question’s Facebook page, but seeing as perhaps not all of you are Facebook users, and also as I’ve recently run across A LOT of great artists, I thought I’d signal you here to the seven names I added today.

François Bissara-Fréreau works primarily in sculpture but also in painting and stained glass. She has carried out many church commissions. You can see her in her Paris studio here:

And being interviewed on KTOTV (Catholic television in France) here:

Unfortunately I can’t understand a word in either of these videos, because I do not speak French! I’m also not sure how to translate the title of the work below (“Legend of the Way”?), but it looks to me like a Resurrection image, with the figure’s strong, wide stance, and his grave clothes unraveling.

Born Maria Elisabeth Stolberg, Sister Marie Boniface was a member of the Benedictine Sisters of Saint Bathilde, a Catholic congregation of women headquartered in Vanves, France. Although Sister Marie was a white Austrian, she chose to depict Jesus and his disciples as black. She passed away in 2012.

As a painter, Peter Koenig seeks to translate gospel stories into modernized settings—much in the vein of James B. Janknegt and Dinah Roe Kendall. In that respect his Good Shepherd Resurrection is a bit of an anomaly, but it does give you a sense of his unique re-visioning of biblical material.

Stephen Holmgren over at Toward Beauty has written a nice commentary on this piece, which he integrated into his Easter sermon earlier this year. (Pastors sometimes ask me for ideas on incorporating art into their sermons; Holmgren provides one very effective example.)

Maggy Masselter is a Luxembourg-born abstract painter living and working in France. Last year she did a Stations of the Cross series inspired by the 1996 murder of seven Trappist monks from the monastery Notre-Dame de l’Atlas of Tibhirine in Algeria by Islamic militants. She incorporated quotes from these monks into the paintings. 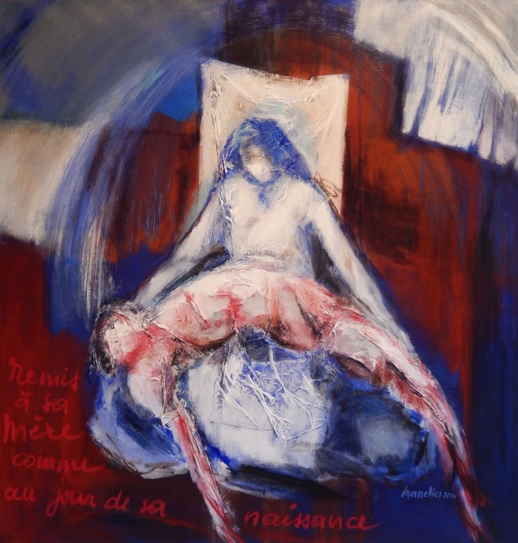 You can see Masselter in her studio, describing her process, here. (The video is in French.)

Also an abstract painter—from Chihuahua, Mexico—Paulo Medina maintains that being an artist “has meant for me the possibility of transcending and reaching certain spaces that are intangible, but lived daily.”

As those of you who follow this blog have probably surmised from its content, I don’t tend to connect as well with pure abstraction. But Medina does have a few quasi-figurative works. Here’s one I really like, which has an expressionist quality.

Other biblical subjects he’s painted include the burning bush, the Annunciation, the Nativity, Jesus with his disciples, the Crowning with Thorns, the Crucifixion (several times), Christ in his tomb, the Ascension, and the Holy Spirit.

Ukrainian artist Natalya Rusetska graduated from the Lviv National Academy of Arts in 2008. She is inspired by the Orthodox icons tradition but has developed her own style, characterized by small-headed, elongated figures.

Another abstract painter! Hailing from Ireland, Judith Tutin says her work “explores the action of paint in various fluid states and the search for a light source which lifts the mind and spirit.”

In Tutin’s Nativity, Mary adores the newborn Christ Child, lying in a manger, as does an angel (or God the Father?) from above. The linear orange strokes that cut down the center, and across, demarcate the corner of the room, but they also—with their cruciform shape—forebode Jesus’s death.