Isaiah 2:4 (cf. Micah 4:3) has inspired many artists and peace activists throughout history.  The verse describes what the millennial reign of Christ will look like:  “He will judge between the nations and will settle disputes for many peoples.  They will beat their swords into plowshares and their spears into pruning hooks.  Nation will not take up sword against nation, nor will they train for war anymore.” 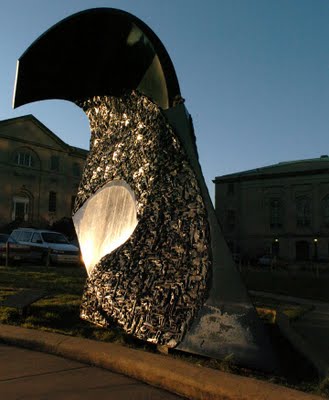 Sculptor Esther Augsburger and her son, Michael, thought to illustrate this prophetic passage by literally beating guns (the twenty-first century equivalent of swords) into the shape of a plowshare, transforming the life-destroying weapons into a life-affirming work of art.  They designed and built the four-ton steel structure themselves.

The 3,000 guns that make up this work were collected from the gun buyback program run by Washington, D.C.’s police department, which seeks to reduce gun violence by reducing gun ownership.  Participants are granted amnesty and anonymity—that is, they are immune from prosecution; they are not even ID’ed.  This no-questions-asked turn-in offer is ongoing, but sometimes incentives are provided, usually through corporate or private sponsors.  In January 1994, for example, former heavyweight champion Riddick Bowe pledged to pay $100 in cash for each firearm turned in on the 15th of that month.  “I think if you have one gun off the street, then maybe that’s a life that you saved,” Bowe said.  Bowe ended up paying out $360,000—for 3,600 guns turned over and disabled (source).  Having heard of the successful turnout, Esther Augsburger convinced then–Police Chief Fred Thomas to let her use some of these guns for her art piece (source).

Guns into Plowshares was installed in 1997 across from the Metropolitan Police headquarters in Judiciary Square but has since moved to the front of the District’s evidence control facility at 17 DC Village Lane SW. 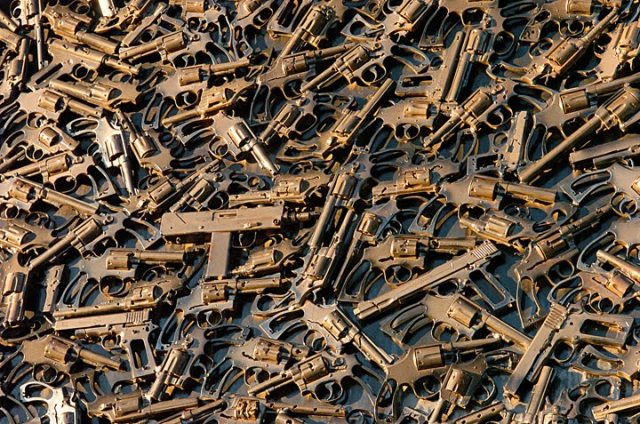 Although commonplace these days and rallied around as much by non-Christians as by Christians, the expression “beating swords into plowshares” was written in a specifically Christian eschatological context, and it’s a shame that the phrase is so often divorced from it in popular usage.  Global peace is certainly worth working toward, with all our hearts and minds, but if the Bible is true, and I believe that it is, global peace will never be a reality until Christ’s kingdom is inaugurated in the end times, when Satan is bound and everyone submits to the complete and perfect rule of Christ.  I’m not saying this to be a downer—on the contrary, I believe that this truth should lend even more vigor to our peacemaking efforts, knowing that they are not for naught but will eventually be realized in full.  Christians are committed to embodying and spreading the kingdom vision and values of Christ, among which are, as we see from Isaiah 2, life, unity, and peace.  And we work not in pursuit of an unattainable ideal but in anticipation of its actual accomplishment, on a universal scale.

Augsburger’s commitment to nonviolence stems directly from her Mennonite faith.

I look at Augsburger’s sculpture as a reminder of my calling to be creative as an ambassador of Christ—to think not just in terms of destruction, but in terms of construction, of transformation.  I think of the work that Christ has done in me—putting to death my sin, disarming my heart.  And in the place of what he took away, he put new life, gave me a new shape.  Notice that Augsburger did not melt the guns down into an unrecognizable liquid but kept their form, so as to memorialize the full picture of redemption, which includes not just the beauty that we were saved into, but the ugliness that we were saved from.

God, this week especially, people are feeling angry and grieved over the devastating effects of gun violence.  Please gather together and transform these emotions into something constructive.  Where there are tools of death, be they material or immaterial, melt them down and shape them into tools that cultivate life.  Thank you for casting such a beautiful vision for humanity.  Please help us to be as committed to its fulfillment as you are.

For more examples of how artists and craftsmen have transformed weapons into things of beauty, see http://www.worldsstrangest.com/mental-floss/swords-into-plowshares-peaceful-weapon-recycling/.

3 Responses to Guns into Plowshares