This August, a court in central Russia banned this painting from all future exhibitions and publications, deeming it “religiously offensive” and “extremist.” 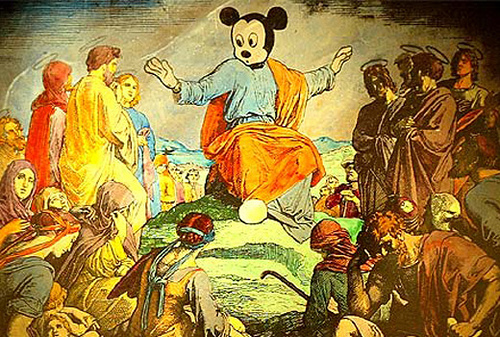 This piece depicting Mickey Mouse delivering the Sermon on the Mount was part of a 2007 exhibition at the Andrei Sakharov Museum in Moscow, called “Forbidden Art.”  The organizers of the exhibition, Andrei Yerofeyev and Yury Samodurov, were charged with inciting religious hatred, a crime under Article 282 of Russia’s criminal code.  They were found guilty and fined 200,000 rubles and 150,000 rubles respectively (about $6,200 and $4,600).

The case’s prosecutor issued the following statement, according to the Russian news source RIA Novosti:  “During the court hearing, it was established that Savko’s technique of uniting the image of Jesus Christ, which is sacred for Christians, and the comical image of Mickey Mouse, which in this situation is vulgar, has turned the graphic work into a caricature of Jesus Christ.  The Gospel story is therefore presented by the artist in the form of a comic, which is an extremely cynical and mocking insult to the religious beliefs and feelings of Orthodox Christian believers.”

The artist, Savko, however, told The Huffington Post, “The purpose of this painting is not abuse of Christ and not abuse of Christians.  This is displaying of current reality:  the substitution of human spiritual, moral values with mass-cultural values.”

Also on display at the “Forbidden Art” show in 2007 was a depiction of the crucifixion, but with the head of Jesus replaced with an Order of Lenin medal, the highest award of the Soviet Union.

As the photo suggests, the exhibition was arranged such that viewers had to look through peepholes in the wall to view the pieces—so as to avoid being involuntarily offended.

This isn’t the first time that curator Yury Samodurov was convicted of offending Orthodox sensitivities, either.  In 2003, he was forced to pay 100,000 rubles after an exhibition called “Caution: Religion!” ruffled some religious feathers.  Within days of its opening, a group of five men vandalized many of the 42 pieces on display, and the exhibition was shut down.  But oddly enough, the vandals got away scot-free. (Read the news story here.) 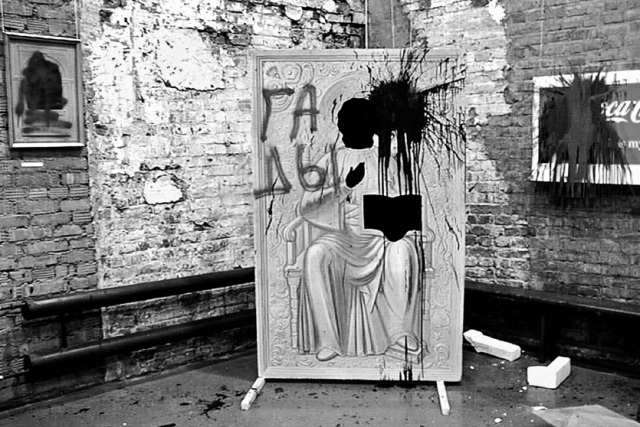 Alexander Kosolapov’s screen print of This is my blood was one of the pieces that was defaced. 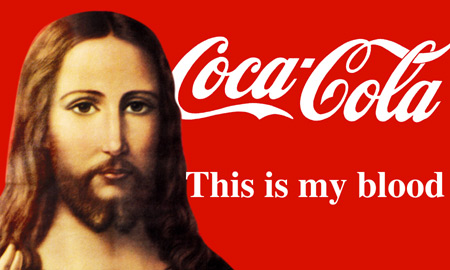 Kosolapov followed up this painting with a companion piece the following year:

Alexander Kosolapov, "This is my body," 2002. Acrylic on canvas.

This desacrilization of a sacred church ritual (the celebration of the Eucharist) is meant to pack a punch.  But as is the case with a lot of controversial art, the Christians usually don’t get it.  One of the main functions of art is to shine a light on truth, which oftentimes involves issuing a challenge to viewers.

Instead of getting all up in arms about these irreverent depictions of our Lord, let us ask ourselves the purpose of such irreverence.  What do these artworks say about (religious and/or national) “brands” or icons?  About reproducibility?  About consumption?  About worship?  Are they criticizing the historical Jesus, or only what we’ve made of him?  Why do these artists seem to be comparing him to Mickey Mouse and Vladimir Lenin?

See also Kosolapov’s mixed-media Caviar Icon, displayed at the “Forbidden Art” exhibition with the caption “Have you eaten caviar lately?”