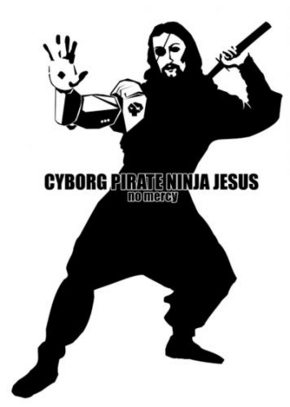 Wow—he’s a cyborg, and a pirate, and a ninja.  That’s one impressive resumé.

This kick-butt Jesus even has his own theme song, which goes something like this:

“Who diced up Pol Pot like Teriyaki Steak?
Who gave the great Ghangis Kahn all that he could take?
Who used his massive cyborg arm to crush the Axis dead?
Who pumped the Germans in the Rhine full of Pirate lead?
Who kung fu kicks anyone who sells mind-altering drugs?
Who’ll infect a robber with scurvy for everyone he mugs?
He’s Cyborg Pirate Ninja Jesus!
Cyborg Pirate Ninja Jesus!”

He also has a Facebook fan page, a comic book, and his own YouTube video game adventure.  Not sure where this meme originated, but it is a few years old.  (Update:  Neil Duffy created the original image, posted above, in early 2005.)  What is interesting to me is that the Internet is chock-full of these inventive Jesus heroes.  Most of it’s all in good fun, of course, but what does it say about Jesus and the world’s general attitude toward him?  Why do we find Jesus adapted in these playful ways, but not Muhammad or the Buddha (or Abraham, or Confucius, or Laozi, etc.)?