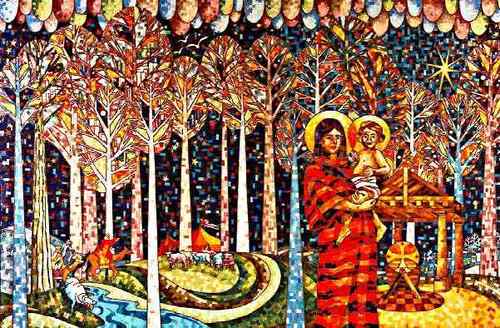 Excerpt from The Vigil: Keeping Watch in the Season of Christ’s Coming by Wendy M. Wright, pp. 116–17:

The church does not abandon the celebration of Christmas on December twenty-sixth. Liturgically, the season stretches out for twelve more days and culminates on the Feast of Epiphany, January sixth. In earlier days, in England, these days were kept as a time of merriment during which ancient customs, such as lighting twelve bonfires for the twelve apostles, were observed. It was also a time of gift-giving; the familiar carol, “The Twelve Days of Christmas,” regales modern carolers with the antics of an eighteenth-century merrymaker who sent his true love a veritable barnyard and theater company of presents as well as a partridge in a pear tree. . . .

Our commercially oriented American society has little room for this kind of delightful, fanciful lingering over a season. Christmas comes to a screeching halt for us the day after. The only vestiges of merriment are found in the after-Christmas sales, where opportunistic shoppers can be found rummaging through bins of marked down merchandise that only a few days before radiated the possibility of being the answer to someone’s Christmas gift wish. The frenzy of holiday partying subsides, and Americans begin to look with grim determination toward the fashioning of New Year’s resolutions to lose those accumulated pounds, kick that pernicious habit, or do something better.

That the season is over, in the secular public arena, is obvious from the fact that store decorations quickly disappear and the spate of holiday specials broadcast on television are suddenly eclipsed by reruns of old movies and last year’s serials. Even in the domestic realm, the vestiges of the season vanish. I am always startled to see how many upended Christmas trees, tinsel clinging to their stiff, twisted branches, top the piles of debris set out on the sidewalks for the city sanitary engineers to take away on December twenty-sixth.

I personally often suffer a mild sort of postpartum depression the day after the Coming itself. All the anticipation of waiting and the heightened experience of the birth day itself are now memories, and we are left with the miracle in our arms and the overwhelming sensation that we have only just been initiated into the truth of it: that we are called to nurture and raise to maturity what has been given. We become aware that we must live, as well as anticipate, the Coming.

Most churches stubbornly resist the cultural amnesia that pervades the atmosphere and keep reminding us, through the proclamation of the word, the images of the Christmas crib, and the melodies of the songs of the season, that Christmas is still very much with us. And many homes stay decorated with signs of the wondrous birth. I have never been able to take our tree down until after Epiphany, even when brittle needles litter the floor, and the presents that blossomed under it have long since been put away. For the days following the Feast of the Nativity are rich in insight and wisdom. They are the days when we contemplate the Christ given to us, the days when the great task of living into the reality of our spiritual maternity is ours to ponder. They are, in some sense, not unlike the first days home after the trip to the hospital, or the time after the midwife or the last helpful female relative leaves you, at last, on your own. You are faced with both the wonderful, frustrating, impenetrable joy and the anxiety-filled responsibility of attending to new life.

This entry was posted in Theology and tagged advent devotional book, the vigil, wendy m. wright. Bookmark the permalink.

1 Response to Christmas isn’t over