Jesus as the Root/Shoot/Branch of Jesse

The Tree of Jesse—a representation of Jesus’s genealogy in the form of a tree—was a popular subject in medieval Christian art. Its name derives from the messianic prophecy of Isaiah 11:1 and 10: “There shall come forth a shoot from the stump of Jesse, and a branch from his roots shall bear fruit. . . . In that day the root of Jesse, who shall stand as a signal for the peoples—of him shall the nations inquire, and his resting place shall be glorious.”

Paul paraphrases this passage in Romans 15, linking it explicitly to Christ: “For I tell you that Christ became a servant to the circumcised to show God’s truthfulness, in order to confirm the promises given to the patriarchs, and in order that the Gentiles might glorify God for his mercy. . . . Isaiah says, ‘The root of Jesse will come, even he who arises to rule the Gentiles; in him will the Gentiles hope’” (vv. 8–9a, 12). Here Paul drives home the plural peoples and nations that Isaiah uses: the messiah has come not just for the Jews but for the whole world. 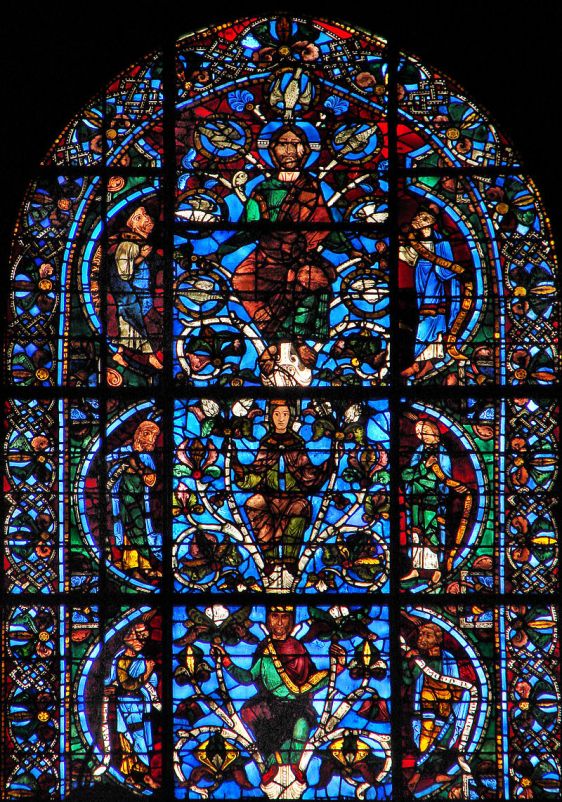 The upper section of the 12th-century Jesse Tree window at Chartres Cathedral in France showing Jesus at the apex and Mary below him.

Russian icon of the Tree of Jesse, 17th century.

Unlike the schematic family trees with which we are familiar, which place the first ancestor at the top and the present generation at the bottom, the Tree of Jesse is read from bottom to top, so as to give Jesus top billing. The figures depicted underneath him, taken from Matthew’s and Luke’s genealogies, vary, but because the Tree’s main purpose is to map the messianic line, most depictions at least include David and Solomon, two of the few godly kings of Israel. Taken altogether the Tree represents a dynasty whose rule has been established eternally in Christ. As God promised David,

And your house and your kingdom shall be made sure forever before me. Your throne shall be established forever. (2 Samuel 7:16)

Jesus is the one who has fulfilled this promise, which the angel Gabriel emphasized to Mary during his annunciation visit:

The Lord God will give to him [Jesus] the throne of his father David, and he will reign over the house of Jacob forever, and of his kingdom there will be no end. (Luke 1:32b–33)

The Tree of Jesse is not to be confused with the Tree of Life, another botanical metaphor used elsewhere in scripture to stand for Christ himself. Though the analogies are certainly related, their iconography is different: the Tree of Life usually has the crucified Christ as its focal point and oftentimes a river flowing from its base (based on Revelation 22:1–4), whereas the Tree of Jesse, in addition to having a much larger cast of characters, features Jesus as a babe in arms or enthroned, and the trunk is usually growing out of Jesse’s side. Both trees speak of the salvation wrought by Christ, but one via the ultimate act of atonement, and the other via the Incarnation, with an emphasis on the long period of waiting Israel had to endure.

The root/shoot/branch imagery of Isaiah raises several questions for me.

The “root” terminology (sheresh in Hebrew) is a bit confusing to me, because when I think “root,” I think “source” or “origin”—in which case Jesse, as biological predecessor, would be the root of Jesus. However, here the writer uses the word in the opposite sense, to describe something that grows out of: Jesus grew out from Jesse; he is an extension, a descendent, of Jesse. This is the most literal reading.

But perhaps my instinctual interpretation isn’t so far off either. In terms of earthly lineage, Jesse may have come first, but in another sense, the eternal Christ is Jesse’s root and the root of all humanity. Paul expressed this idea in Colossians 1:15–17:

Jesus is referred to within the same passage as root, shoot/stem/rod (depends on the translation), and branch. Which part of the tree is he?

One of the rules of writing that I’ve heard since grammar school is don’t mix your metaphors—that is, don’t use different metaphors in relation to the same subject, at least not close together, because doing so creates visual confusion. Mixed metaphors, however, are common in ancient Hebrew literature, where they are often used very intentionally, sometimes to establish synonymous parallelism.

My inclination as a reader of scripture is to try to reconcile all the incompatible metaphors it gives me. I think, Well, if Jesse’s the root, then Jesus is the shoot; but Jesus is also called “root,” so then where on the tree does that place the the rest of the family line? And what of Mary—maybe she’s the shoot, and Jesus the fruit-bearing branch . . . ? The thing is, the metaphors aren’t meant to be reconciled. Each one is supposed to give us just a little glimpse of some aspect of its subject, not to suggest that A is like B in every way and can never be not-B.

Thus Jesus can be root, shoot, and branch—all three. (Isaiah mixes the root and shoot metaphors again, in reference to Christ, in Isaiah 53:2.)

I already discussed Jesus’s “rootness” above.

Jesus is a tree trunk—a “shoot,” or some translations have “stem”—in the sense that he sprang up from Jesse, bringing the Davidic dynasty to new heights.

Artists, though, most commonly show Jesus as branch—the highest-reaching branch of the tree (cf. Isaiah 4:2; Jeremiah 33:14–16). In the Tree of Jesse, he is usually shown as an infant in the arms of Mary, with the crown of the tree fanning out behind him, reinforcing his kingship. Jesse, on the other hand—who is called both stump and root in Isaiah 11:1—is traditionally shown at the base of the tree, while the lineage in between makes up the trunk.

Whichever tree part you prefer to picture Jesus as, the main idea is that he came through the royal line of David as the messiah Israel was waiting for.

Why is Jesse’s name rather than David’s invoked in the messianic title “Root of Jesse”?

David was the founder of the dynasty through which the Jewish messiah was to come. Jesse was David’s dad—which I suppose makes him royal by association . . . but he was no king. What is so foundational about Jesse, such that his name is commemorated in a title for Christ and his likeness given prominence in the iconography of Christ’s family tree? John the Evangelist shifted the name in the title down a generation, using “Root of David” instead in reference to Jesus (see Revelation 5:5 and 22:16)—which seems more appropriate.

All I can guess is it’s because Jesse is mentioned in the story of David’s anointing as king (1 Samuel 16:1–13). God tells Samuel, “I will send you to Jesse the Bethlehemite, for I have provided for myself a king among his sons” (v. 1). Also, David is referred to many times as “the son of Jesse.”

In 11:1 Isaiah gives us a picture of a forest that has been so devastated that only a single stump remains: this is his prophecy for Israel (cf. 6:13, 9:14). The preceding chapters describe God’s anger at his people’s continual disobedience and his resolve to bring judgment on them by giving them over to oppression by enemy nations.

From the eighth to sixth centuries BCE David’s dynasty dwindled, eventually coming to apparent extinction with the Babylonian captivity. God seemed to have forgotten his promise, seeing as there was no king on the throne of Israel (Davidic or otherwise) for six hundred years. A stump was all that was left of the once-great nation.

But life remained in the stump. With his prophetic eyes, Isaiah saw a shoot emerge, and then he saw it grow into a mighty tree. That shoot is Christ, through whom the throne of David has been restored.

I love the Tree of Jesse painting by Ansgar Holmberg of the Sisters of St. Joseph of Carondelet.

She created it as part of her O Antiphons series, which comprises one painting for each of the seven names of Jesus that Isaiah uses and that are traditionally sung at Vespers during the last week of Advent: Wisdom, Adonai (Lord), Root of Jesse, Key of David, Dayspring, King of Nations, and Emmanuel. 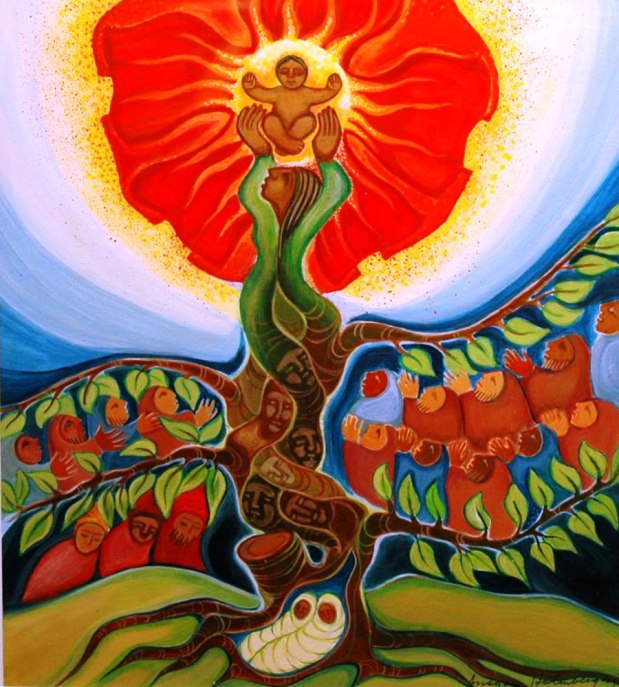 O Root shows Jesus’s family tree, starting with Adam and Eve at the root, asleep in their burial clothes as they await the arrival of the messiah. The figures that sit on and dangle from the branches and that are embedded in the twisted trunk are too generic to be identified, but then you have Mary emerging in green at the top, holding high the crowning glory of this royal lineage: her son Jesus, who is surrounded by a bright red blossom that billows out like a skirt and that is backlit by the sun.

The stump that Isaiah prophesied about is visible at the bottom of the tree, alluding to the wrath God had carried out on his disobedient people but also his grace in cultivating a new stem of promise to rise out of that punishment.

For centuries the church has chanted the following antiphon, a solicitation of Jesus’s intervention in our world and praise for his beneficent rule:

O come, thou Root of Jesse’s tree,
an ensign of thy people be;
before thee rulers silent fall;
all peoples on thy mercy call.

You may recognize it as one of the verses of the Advent hymn “O Come, O Come, Emmanuel”—though sometimes it is excluded in favor of the related but more stirring verse

O come, thou Rod of Jesse, free
thine own from Satan’s tyranny;
from depths of hell thy people save,
and give them vict’ry o’er the grave.

Check back in a few days for a companion post on the genealogy of Christ, which will explore the discrepancies between Matthew’s and Luke’s lists as well as the curse of Jeconiah, which some people say disqualifies Jesus from being the messiah.

3 Responses to Jesus as the Root/Shoot/Branch of Jesse