This Saturday, October 31, is an important commemorative date in the Protestant calendar: on this day in 1517 Martin Luther nailed a written protest to the door of Wittenberg Cathedral, listing ninety-five ways in which the church had departed from its gospel core and thus initiating a major reform movement whose supporters eventually split from Roman Catholicism.

Though I think it sad that Christ’s church is divided, I stand in solidarity with the reformers, who saw that Truth had become so muddied by church practices and teachings that it was at the time unrecognizable. It needed a thorough wash-down.

One aspect of the Protestant tradition that I’m ashamed of is its generally negative opinion of, or at least indifference toward, images. Though this has been changing slowly through the efforts of artists, arts writers, liturgists, and well-rounded clergy, the Protestant legacy has instilled in its inheritors a natural hesitance to embrace the visual, for fear—I guess—of appearing “too Catholic.”

Iconoclasm was a major feature of the Protestant Reformation, accompanied by widespread destruction of church art under the sanction of Andreas Karlstadt, who denounced all images as idolatrous. This view was supported by Ulrich Zwingli, and although John Calvin’s views were less severe, he rejected the use of images as aids to worship and wanted them out of the sanctuaries.

Martin Luther, however—the reformer par excellence—distanced himself from this agenda item, holding a more tolerant stance toward images. In a 1525 essay written against the radical efforts of Karlstadt and the image breakers, Luther claimed that images of Christ’s Passion, for example, were not intrinsically objectionable, for “it is impossible for me to hear and bear [the Passion] in mind without forming mental images of it in my heart. . . . If it is not a sin but good to have the image of Christ in my heart, why should it be a sin to have it in my eyes?”

What needed reform, according to Luther, was how such images were used. Their function had indeed become corrupted in the majority of churches: they had morphed into objects of superstition and/or veneration. But destruction was not the answer, said Luther:

Do not suppose that abuses are eliminated by destroying the object which is abused. Men can go wrong with wine and women. Shall we then prohibit wine and abolish women? The sun, the moon, and stars have been worshiped. Shall we then pluck them out of the sky? Such haste and violence betray a lack of confidence in God. (qtd. in Here I Stand, p. 213; from a sermon given on March 12, 1522, in Wittenberg)

Retraining in proper use was the answer.

Luther was not a staunch advocate for art in churches, but he did acknowledge the didactic value of images. To this end he commissioned his friend Lucas Cranach to make an altarpiece that would lay out the core tenets of the Christian faith as he and his fellow reformers understood it. The result was Law and Grace (sometimes referred to as Law and Gospel).

The painting is divided in half by a tree whose left side is devoid of leaves but whose right side is verdant—which suggests the barrenness of a life lived outside the state of grace, of the heart that has not received Christ, and by contrast the spiritual lushness brought about by grace received. The left and right sides can’t be classified strictly as old covenant versus new, or law versus grace, since not all the scenes fit into such a program. Instead, the imagery communicates Luther’s view of the law (drawn from the Book of Romans) as a measuring stick that reveals our need for a savior, a role filled by Christ. In Lutheran theology, the law is not an agent of justification; it only condemns, whereas Christ justifies. The interpretation of the painting is aided by the inscriptions, taken from scripture, along the bottom.

The left register, middle ground, shows Adam and Eve partaking of the forbidden fruit, unleashing sin and death into the world. Beside them is a Hebrew camp in which a bronze serpent has been erected on a pole, per God’s instructions to Moses; those who looked on this raised serpent were saved from the death that had been spreading through the camp (Numbers 21:4-9; cf. John 3:14-15). At this early stage of salvation history God was already teaching the Israelites how to exercise faith in his saving power rather than in their own merit. 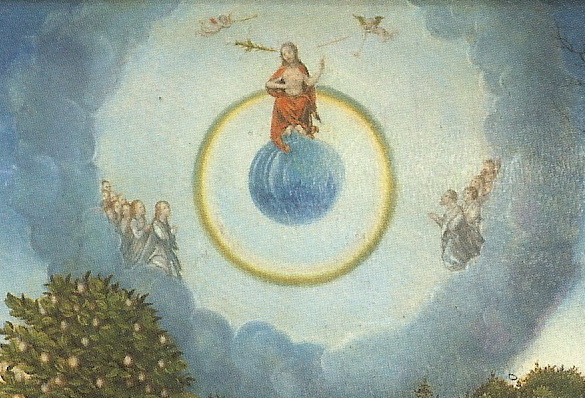 Above these two scenes Christ sits upon the earth in judgment. From his right ear protrudes a lily, symbolizing mercy; from his left, a sword, damnation. The latter end befalls the naked man in the foreground, who is being prodded to hell by a skeleton (Death) and a demon (Sin) while Moses and other prophets point accusingly to the tablets of the law. The implication is that this man trusted in his own ability to meet God’s standard of righteousness, but he fell tragically short.

In the middle ground of the right register is the Annunciation to the Shepherds, that familiar episode from the Christmas story in which an angel announces that the long-awaited messiah has been born to bring joy, peace, and salvation to the world.

In the foreground John the Baptist, prophet of the New Testament, draws our attention to another plot point in this messianic narrative: the crucifixion and resurrection of Christ. At the foot of the cross the Lamb of God—an emblem of Christ—tramples Sin and Death, those two ungainly creatures who terrorize the man on the opposite side. Higher up, a stream of blood shoots with laser precision from the wound in Christ’s side to the man who stands before him in humble repentance. Naked, vulnerable, with no good deeds to recommend him, the man relies wholly on the saving work of Christ.

Altogether this altarpiece conveys the sola fide doctrine that’s so central to Protestant theology: we are justified, made right with God, not by works but by faith alone (Ephesians 2:8-9)—faith in the God who graciously took on the punishment of sin that the law demanded, dying in our place.

Like Luther, not all Protestants were averse to images of a religious nature, but they did redefine their function. The art that was a direct product of the Reformation had one main purpose: to teach doctrine (or to accuse opponents of false doctrine by means of satire). By no means should it stir the imagination or the emotional faculties, which is where, the reformers believed, the Catholic church had gone wrong.

Though I do not share the sixteenth-century Protestant fixation on didacticism in art nor its rejection of imagination and emotion, I appreciate how Luther and others, despite several very vocal (and vandalizing) opponents, recognized the value of the visual and took the initiative to adapt the old, old practice of art making rather than cast it off entirely.

3 Responses to An early Protestant painting (commissioned by Luther)