From my private collection: Wailing Wall: Song for Quin by Steve Prince

Two weeks ago my husband and I moved 400 miles down the East Coast from just outside Boston to just outside Baltimore. In our last few months as New Englanders whenever people asked us, “Where to?” our reply was oftentimes followed by a pitying “Oh . . .” or “Yikes, be careful!” They had the April race riots in mind.

But our assistant pastor at Citylife Presbyterian, David Cho, had a different reaction. He was genuinely excited for us, expressed a love for the city, and said something like, “What a great opportunity to practice justice and reconciliation—there are obviously a lot of hurting people in Baltimore, and they need more people to hear their stories and to advocate for them.”

David sees everything through a gospel lens, which is one of many reasons I was so blessed to be under his leadership and teaching for the last five years. When Michael Brown was shot in Ferguson, Missouri, last August, David led our church in corporate lament—for the death of a young man and all the pain that occasions, for the vandalism and looting that followed, for racial injustices that still persist in America, and for people who deny there’s even a problem, including our own complicity. As a church we stood together and proclaimed that none of this is right. We were given time to grieve individually and to petition God for understanding, grace, and healing. We prayed for the families on both sides and for improved race relations in our nation.

Justice (mishpat) is a concept that has always resonated with me perhaps more than any other biblical concept. It is an attribute of God, which his people are commanded to exemplify. Jesus preached about it in his inaugural sermon. The new heaven and new earth will be full of it. I yearn so much for justice, for the world’s wrongs to be righted. When the biblical prophets speak of it, whether as a moral imperative or as part of a futuristic vision, and pretty much anytime a news story flashes across my screen, I become so twisted inside with a feeling of “Maranatha!” (Come, Lord Jesus!) We desperately need help in bringing about this rightness that scripture teaches.

It is this intense longing for justice that attracted me to Wailing Wall: Song for Quin, a linoleum cut by African American artist Steve A. Prince. I purchased it last November at a CIVA auction, but because it was too large for my old apartment, I had nowhere to display it—though I’d occasionally unroll it for guests. Now with 300 additional square feet, I’m finally able to give it the visibility it deserves: it hangs right above the mantle as the focal point of my living room. I’m looking forward to it sparking conversation!

The linocut shows four men and three women circling a fortified wall, crying out in lament. Above them are two towers, each manned by an armed guard. Searchlights reveal three angels flying on the premises—one of them appears to have been shot.

Prince lets us peer all the way inside the main figures, down to their muscle, tissue, and bone, as if to reveal the deeply embedded source of their cries. They very literally bare their souls, which emerge as ghostly figures from different parts of their bodies—their lungs, their arms, their lips, their hands, their hearts, their guts. These are spirits of justice that they send out into the world, and they’re so powerful that they’ve set a crack in the lower right corner of the wall.

When I first saw the linocut, I immediately thought of the seven Israelite priests who, according to the Book of Joshua, marched around the wall of Jericho seven times blowing trumpets, which along with the shouts of the Israelite army sent the wall tumbling down. Enslaved black communities in the antebellum American South read the wall of this story as a symbol of systematic oppression, and through spirituals like “Joshua Fought the Battle of Jericho,” they prayed for a day when that oppression would be dismantled.

Hear gospel queen Mahalia Jackson sing it below in this 1957 clip from The Nat King Cole Show.

The walls of Jericho are symbolic of a long-standing tradition which kept the ex-slaves out of Canaan, their promised land. . . . Only the most naïve reader misses the point that what Joshua did can be done again and again, wherever wrong and evil are to be overthrown. . . . Once the walls are down, the ex-slaves walk into the capital of Canaan, free men in a free land.

In addition to the Battle of Jericho, this linocut references the Western Wall in Jerusalem, where Jews especially, but also Christians, go to pray.

Prince told me he created Wailing Wall after hearing that his cousin Quin was sent to prison for crimes he did not commit. This caused Prince to reflect on the urgent need for reformation of the US criminal justice system—not just because of the sometimes false verdicts it dispenses, putting innocent men and women behind bars, but also because of its failure to reintegrate former inmates back into society. In an e-mail to me dated November 30, 2014, Prince wrote,

We are witnessing large sectors of our population being branded with a new-age “Scarlet Letter” P, for prisoner, and disenfranchised from voting, housing, and jobs. The vicious cycle of prison to community to prison again needs to be broken. . . . The piece calls for us as Christians to rise up and pray like Joshua of old, to speak a word to the foundations of these systems of incarceration that are stealing the ability of the people to soar with the wings of freedom we were born with.

My husband and I see Wailing Wall every day, and it reminds us of our obligation as Christ followers to raise up our wails and join the march. Maybe it sounds like a bit of a downer to put in such a prominent place in the home, but on the contrary, I find it empowering. There are lots of walls that need toppling, but God is on our side. 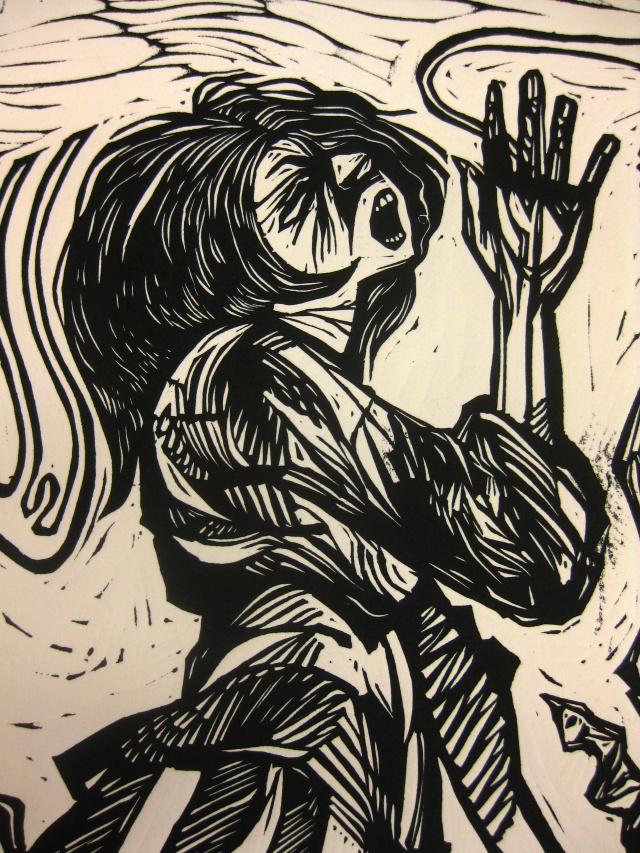 3 Responses to From my private collection: Wailing Wall: Song for Quin by Steve Prince