In Song and Picture: The Color of Christ’s Passion 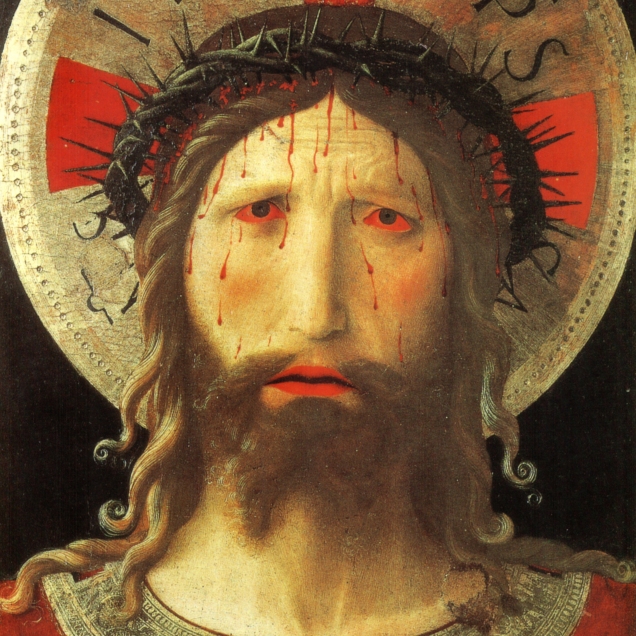 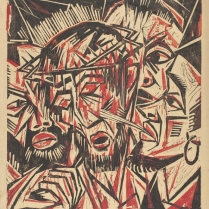 Daniel Bonnell, The Color of Red, 2000. Oil on canvas, 48 x 32 in. Source: http://www.bonnellart.com/www.lifeonthenile.com/The_Color_of_Red.html

Presbyterian minister Vito Aiuto and his wife, Monique, make up the duo known as The Welcome Wagon. The final track on their debut album, “Deep Were His Wounds, and Red” is, in the words of its producer Sufjan Stevens, “a quiet bluesy dirge” with an Appalachian feel. It’s a retuning of a mid-twentieth-century hymn that, despite its gruesome opening line, is ultimately bright, for there is “healing in the wounds he bore.”

Red, the color of blood, is the color of Christ’s Passion. Each artist in the above gallery uses this color in a unique and evocative way.

The fifteenth-century Dominican friar-painter referred to posthumously as Fra Angelico (“Angelic Brother”) is known for his generally warm, sweet paintings of biblical subjects, especially angels. Christ Crowned with Thorns is for sure an outlier in his body of work; when the Metropolitan Museum of Art hosted a major Fra Angelico exhibition in 2005, critics mentioned how starkly this painting stood out from the rest in its intensity and its power to confront. Jesus’s eyes are more than bloodshot, they’re blood filled; they search us out and implore us to behold his suffering. Scholars think it likely that this vivid detail was inspired by a vision of St. Bridget of Sweden, whose published Revelations was highly popular at the time. Relaying to us a description she claims to have received from the Virgin Mary, she writes that the crown “pricked so hard that both my son’s eyes were filled with the blood that flowed down.”

The color red is repeated in the cross shape inside Christ’s halo and in his robe, where it is offset by gold, suggesting how Christ’s suffering is tied to his majesty, his glory. His halo bears the monogram IHS XPS, derived from the Greek letters in the name and title “Jesus Christ.” (The curvilinear symbol above each letter grouping indicates that they are abbreviations.) The gold collar around his neck identifies him in Latin as “King of kings and Lord of lords,” a reference to Revelation 19:16.

Fast-forward five centuries to Otto Lange, a German Expressionist—an art movement characterized by exaggerated form, strong color, and violent marks of the brush or chisel. In Lange’s The Mocking of Christ, red scratches and besmears all the characters in the scene. It is the color of Christ’s self-outpouring and the color of his mockers’ cruelty. Even during this degrading ordeal, light continues to emanate from Christ’s person.

Red is prominent too in a crucifixion painting by contemporary artist Daniel Bonnell. In The Color of Red, a blood-red sun spills out across the horizon behind the crucified Christ, creating a second cross outline as it bisects the head-to-feet stream of blood running down Christ’s body. The idea of nature participating in the Christ event has a biblical basis and found visual expression in the Middle Ages, with artists often depicting the sun and the moon crying in crucifixion images. Bonnell innovates on this motif of cosmic mourning by showing the sun bleeding out, identifying with Christ in this profound way. Its gold circumference frames Christ’s bowed head like a halo, its coloration suggesting that on the outer edge of suffering lies the hope of resurrection, of victory.

Lastly, we come to a page from a fifteenth-century illuminated manuscript that displays emblematically the five wounds inflicted on Christ during his crucifixion: a piercing in both hands and both feet, and one in his side. The Five Holy Wounds attracted a large devotional following in the late Middle Ages, giving rise to prayers and meditations focused on this one aspect of the Passion. With its five gashes freshly gushing blood, this page invites us into contemplation of the woundedness of Christ and its meaning for us today.