In Song and Picture: Light for the Way

Over the next month-plus leading up to Easter, I’m going to publish a series of song-and-picture-group pairings based on different themes. My hope is that the music, lyrics, and visual art will combine to call you into deeper reflection on that theme and to foster in you a spirit of worship.

Each post will have an audio player embedded in it along with a small gallery of images. I recommend that you study the images, one at a time, (click to enlarge) as you let the song play. If you finish before the song ends, circle back through. Which image draws you in the most? Sit longer with that one; let it evoke what it will.

At the bottom I will include some brief reflections of my own, but I prefer you not read these until you’ve finished your own reflections. As already suggested, I intend for song and picture to interpret each other—they’re complementary—but feel free to follow your mind wherever either takes you, even if that be beyond my own curatorial design.

Listen: “Dayspring of Life.” Words, music, and performance by The Brilliance, 2012. 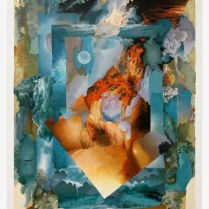 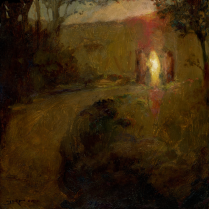 “Dayspring of Life” is from the album Lent by The Brilliance, a two-man band made up of David Gungor and John Arndt. Lent is a time of confession and repentance, a walk through the valley of “darkness, shadow, death.” But whenever we descend there, God’s grace meets us. The singer addresses God as “Dayspring”—that is, Dawn—and beseeches him to throw some of his light his way. What a comfort it is to know that whatever personal darkness we find ourselves in at any given time, whether uncertainty or suffering or sin or some combination, we can always call on God’s light to guide us back home—to wholeness, to life.

Shraga Weil (1918-2009) was an Israeli Jewish artist whose faith is evident as the inspiration behind his work. Here he depicts the pillar of fire that led the Israelites through the desert to the Promised Land after they had escaped from their oppressors in Egypt. A manifestation of the divine presence, the pillar would appear each night, the scriptures tell us, so that the Israelites could continue their journey in the dark. Despite the mumblings and doubts and disappointing behaviors of his people, God did not withdraw his presence from them but rather brought them safely to their destination.

Weil said that the blue portals in the painting symbolize “the gates of freedom and hope.” I showed my husband the serigraph, and he said it reminded him of torii, the rectilinear gateways that mark the entrance to sacred spaces, such as shrines, in Japan. In this reading, the fire cuts out a path for us and in doing so sanctifies the ground we walk on; it sweeps through the threshold between the profane and the holy, inviting us to follow. We are asked to see ourselves as the traveler in the bottom left corner. Dare we embark on this divinely led journey through the desert?

The second picture in the group is a painting by Mormon artist J. Kirk Richards, and it represents another pilgrim journey told of in the scriptures: that of the two disciples on their way from Jerusalem to Emmaus following the death of their teacher, Jesus. While they are walking, a third traveler sidles up beside them, listening to their conversation about how Jesus, who was supposed to redeem Israel, was now dead and gone. It turns out that this third traveler is the resurrected Jesus Christ himself, but the eyes of the two others were somehow prevented from recognizing him until they reached Emmaus and he broke and blessed a bread loaf. This journey was for Cleopas and the other unnamed disciple a journey into real seeing: they were walking in darkness—disappointment, disillusion—but then Christ showed up to walk with them and enlighten them. Richards has imagined Jesus as luminous in his resurrected body, an outward sign of his inward state of blessedness and his mission to guide humanity in the way of truth. Could it be that Jesus has been walking with us all along (as the Spirit) but that we just don’t recognize him?

Peter Eugene Ball’s sculpture Light of the World is titled after one of Jesus’s most famous self-declarations. The figure’s arms are spread open wide in a gesture of invitation. “Come, bask in my light,” Jesus seems to say. “Receive warmth. Receive clarity.” Commissioned for an Anglican church in the UK, the sculpture beckons parishioners to prayer and praise. Its metal surface reflects the glow of the candles that surround it, lit by supplicants who need his light.

And now, back to the song, by a duo whose very name pays homage to the “brilliance” of Christ:

This entry was posted in Music, Theology, Western Art and tagged art for lent, devotions for lent, j. kirk richards, light of the world, music for lent, peter eugene ball, pillar of fire, road to emmaus, shraga weil, the brilliance. Bookmark the permalink.

1 Response to In Song and Picture: Light for the Way