The Christmas Truce of 1914

This December marks the centennial of the famous ceasefire along the Western Front during World War I. On Christmas Eve, 1914, along the four-hundred-mile frontline, enemy soldiers spontaneously emerged from their trenches, arms laid aside, to celebrate Christ’s birth together. They sang carols, exchanged gifts (jams and candies, cigarettes, newspapers), kicked around a soccer ball, and shared photos of loved ones. They also buried each other’s dead and prayed communally over the bodies, led by chaplains. Some even exchanged home addresses and promised to visit after the war.

One soldier described it in a letter home as “the Wonderful Day.” Another soldier, Pvt. Karl Muhlegg, wrote, “Never was I as keenly aware of the insanity of war.”

Though temporary truces are not unique in military history (they have been recorded since as far back as the Trojan War), never have they been carried out on such a large scale, and accompanied by such fraternization, as that of the Christmas Truce of 1914. Remarkably, this truce grew out of no single initiative but sprang up independently in many of the camps, against the orders of higher-ups. In most places it lasted from Christmas Eve through Boxing Day (December 26), though in some it lasted into January. It is estimated that some 100,000 men took part.

Inspired by this event, French filmmaker Christian Carion wrote and directed a dramatized film version of it, called Joyeux Nöel, which was nominated in 2006 for an Academy Award for Best Foreign Film. The film focuses on three different regiments—one Scottish, one French, and one German—and their interactions with one another during that first Christmas on the front.

The pivotal scene, in which the truce is initiated, shows a conscripted German opera singer singing “Stille Nacht” (Silent Night) in his trench. The Scottish, stationed downfield, hear the distant song and start playing an accompaniment on bagpipes, which piques the attention of the French. Throughout the song, the German becomes more and more engaged: aware now of a listening audience across the void, he turns around, performing toward them. After the song, all three sides applaud, giving the opera singer the courage to step out of his trench and into No Man’s Land, singing “Adeste Fideles” (O Come, All Ye Faithful)—in Latin, the universal language of the church—and holding up a mini lit Christmas tree as a sign of peace.

This episode is based on actual recorded history (as told by veterans). In reality the opera singer was not a soldier but was sent to the front by the German Crown Prince Wilhelm to entertain the nation’s troops. Having an international reputation, his voice was recognized by a Frenchman across the way, who started cheering and after the song ran out to meet him.

Carion said that the notion of music as a medium for peace really appealed to him. “I liked the idea that the art of music could mute the war,” he said in an interview.

In 2011 composer Kevin Puts and librettist Mark Campbell adapted Carion’s screenplay into an opera titled Silent Night, which won the Pulitzer Prize for music. Campbell remarked that the core message of the opera is that “war is not sustainable when you come to know your enemy as a person.”

No wonder the military authorities were so outraged when they caught wind of the fraternizations taking place all the way down the line: the soldiers were making a spectacle of war, exposing its absurdity and undermining its basis. By getting chummy with the enemy, they were subverting the whole system, a system that teaches men to kill without thinking anything of it. It’s just your duty, and that’s that. You’re taking down government proxies who make up a dangerous collective that must be stopped.

Front page of the December 31, 1914, edition of the London Daily Mail. The headline deck reads “Snowballs and jokes with the foe.”

But what happens when you learn the enemy’s name, and the names of his three kids? When you share a drink, and swap stories about your plans for after the war? When you help dig a hole for the enemy’s slain comrade, and watch the enemy mourn that loss? When you worship the same Savior side by side on the eve of that Savior’s birth?

War doesn’t work in this context. And so the authorities did everything they could to put an end to the truce. There were no executions for treason—first off, because of the enormous number of offending parties, and second, because executions would mean trials, which would mean the public would find out about the fraternizations and possibly lose faith in the system. Instead, men were removed from the regiments deemed “contaminated by fraternization” and reassigned, so that they could fight opposite a bunch of unknown faces and therefore shoot more easily without qualm.

In Carion’s film, the fraternizations cripple the three main soldiers’ ability to continue performing at war; having seen the humanity of the so-called enemy, how could they then go back to hating him? This permanent change of attitude may have happened to some of the Christmas truce participants, but overwhelmingly, as is apparent from the outcome of the war, which lasted another four years, most of the soldiers simply returned to business as usual—the business of killing, in fulfillment of their countries’ orders.

The image of No Man’s Land—a middle ground strewn with barbed wire, blood, dismembered body parts, stinking corpses, land mines, artillery remains, and other fragments of death—being cleaned up and filled with life and goodwill on Christmas Eve is confounding but inspiring. The place where no one dared venture transformed into a party hall, a soccer field, a sanctuary, a ground of common humanity. 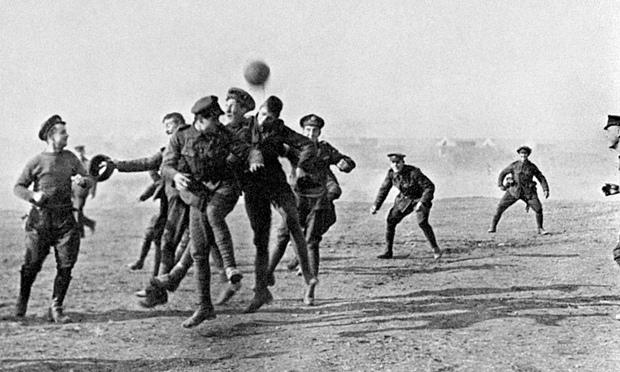 Enemy soldiers enjoy a game of soccer during the famous Christmas Truce of 1914.

What drew the soldiers out of their defense holes a hundred years ago to greet one another and to sing and to play was the birth of Jesus Christ. Cynics will say that the truce was merely a practicality—each side wanted time to gather up their fallen bodies and repair their defenses without fear of enemy fire—and that Christmas was just the pretext, but I say that the common religious heritage that bound the three cultures was more consequential than that. Jesus’s story provided the occasion of celebration during the soldiers’ truce, the foundation of the funeral liturgies, and the reminder of an ancient call to peace.

“Silent Night” is a fitting theme song for the movie and the opera. For one night during that Great War—and in some places even longer—all was calm, all was bright, just as it was one night in first-century Palestine . . . or at least that’s how it was perceived by those who came to the stable to worship the newborn Prince of Peace. In reality it was a dark and tumultuous time, full of murmurings and state-sanctioned violence, but the arrival of Jesus, God in flesh, drowned out the noise, trumped the darkness. And not quite two thousand years later, on the Belgian battlefields of World War I, the spirit of Peace descended upon troop after troop, calling them forth into a camaraderie that transcends national ties. The world had told them they were enemies—the Germans versus the Allies—but their experience that night taught them that they could be friends. And when they returned to their trenches after some Christmas merrymaking, they slept in heavenly peace.

What a pity that that peace was so short lived. By the new year, hostilities had resumed in most places. The Christmas truce faded like a dream, and the war claimed over sixteen million lives.

People say that such fraternization would be impossible in today’s wars because of the lack of shared faith between opposing sides, and sometimes even within a given unit. Would it? I guess I prefer to bank on Gabriel’s promise to Mary that “nothing will be impossible with God,” and to long, as did Scottish Canadian writer Frederick J. Niven (1878-1944), for the age when “every day / Shall be as Christmas Day.”

“A Carol from Flanders” by Frederick J. Niven

In Flanders on the Christmas morn
The trenched foemen lay,
The German and the Briton born,
And it was Christmas Day.

The red sun rose on fields accurst,
The gray fog fled away;
But neither cared to fire the first,
For it was Christmas Day!

They called from each to each across
The hideous disarray,
For terrible has been their loss:
“Oh, this is Christmas Day!”

Their rifles all they set aside,
One impulse to obey;
’Twas just the men on either side,
Just men — and Christmas Day.

They dug the graves for all their dead
And over them did pray:
And Englishmen and Germans said:
“How strange a Christmas Day!”

Between the trenches then they met,
Shook hands, and e’en did play
At games on which their hearts were set
On happy Christmas Day.

Not all the emperors and kings,
Financiers and they
Who rule us could prevent these things —
For it was Christmas Day.

Oh ye who read this truthful rime
From Flanders, kneel and say:
God speed the time when every day
Shall be as Christmas Day.

3 Responses to The Christmas Truce of 1914