What the cross has to say to civil rights struggles

On September 15, 1963, a bomb tore through the east wall of 16th Street Baptist Church in Birmingham, Alabama, killing four little black girls who were attending Sunday school. The act of four white men, this bombing was only one of many racially motivated attacks in the city that had ended fatally that year, but this one gained worldwide attention and led to the passage of the Civil Rights Act in 1964. 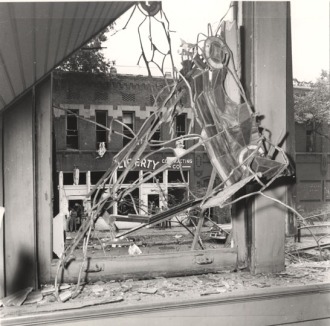 How is one to respond to such a horrific act of violence? What comfort is there for the four families and the church body that were forever altered that day? What recourse?

Welsh artist John Petts believed that the Crucifixion was the only thing that could speak meaningfully into the situation, and so using funds raised by thousands of his fellow Welsh people, he produced a large stained glass window depicting the crucified Christ and donated it to 16th Street Baptist Church to replace one of the windows that had been destroyed by the blast.

The window depicts Jesus as a black victim, suffering in solidarity with his people. The inscription says, “You do it to Me”—a reference to Matthew 25:40, in which Jesus tells his disciples that when they do wrong to others, they do wrong to him. This reference serves a double function: it affirms the dignity of African Americans by identifying them with Christ, and it also confronts their attackers, the aim being reconciliation.

Notice Jesus’s hand gestures in this image: with one hand he is rejecting injustice (“Stop. No more.”), and with the other he is extending forgiveness. Petts’s Crucifixion offers hope to both the oppressed and the oppressor, in the assurance that God’s mercy to wrongdoers is abundant and free, but also in the assurance that God will not tolerate injustice forever. The rainbow above Christ’s head, which spans the stretch of his arms, speaks promise. And the crossbar that cuts across the frame, with dashed lines like road surface markings, reminds us to take this message of promise, of hope, into the streets of our cities.

As the church continues its fight against racism fifty-one years later, we must be, like Christ in this image, firm but open: firm in our convictions and assertions, but free of all bitterness and open to receive the repentant into our community.