Located just off Leicester Square in London’s West End, this round church is tucked cozily between a movie theater and (when I was there in April) a construction site. I knew about the Cocteau mural, and so my husband, Eric, and I set off in search of it, taking a few wrong turns before arriving. (We were looking for a rotunda, not knowing that it’s hidden behind a flat brick facade!)

Inside, what a change of pace from the noise and flashiness of Piccadilly Circus! The pews stretch wide to invite people to pray, reflect, hear God—or even just to take a rest, as several were doing while we were there.

Serving as a mission for the French (and French-speaking) community in London, Notre Dame de France has existed at this site for a century and a half. In 1865, the Marist Father Charles Faure bought a late-eighteenth-century panorama building (an entertainment venue where people came to see long scroll paintings displayed along the cylindrical walls in a 360-degree view), and architect Louis Auguste Boileau transformed it into a church. The church suffered bomb damage during World War II but was reconstructed in 1953 by Hector Corfiato of the École des Beaux-Arts in Paris. During this time of reconstruction, new art was commissioned for the interior and exterior.

On the two pillars outside is a series of eight scenes from the life of Mary, carved by students from the École des Beaux-Arts. Notice the different styles of the different artists.

What stood out to me as unique is that in the Annunciation carving, the artist depicts a whole flock of doves rather than just a single one to represent the Holy Spirit sweeping in. 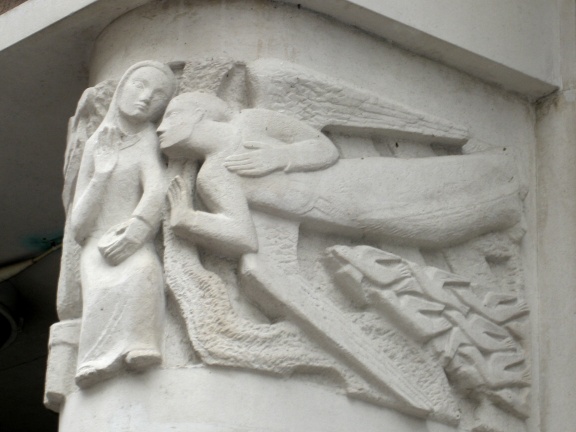 The Flight to Egypt. Signed “Bourdet-Bulioz.”

Jesus as a child, with Mary and Joseph. 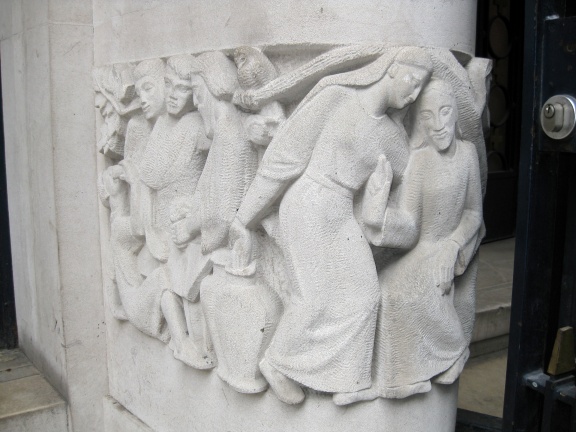 The Wedding at Cana.

The Pietà, or Lamentation over the Dead Christ. Signed “Philippe Scrive.” 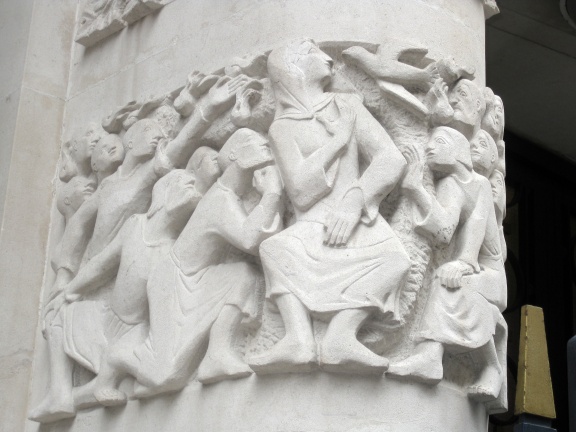 I did not get a photo of the Our Lady of Mercy sculpture above the entrance, but you can find one on the church’s art page.

A Benedictine monk of En Calcat Abbey, Dom Robert is known for his lush artistic depictions of the natural world and its animals.

In the tapestry behind the high altar of Notre Dame de France, birds, fish, butterflies, and mammals gather round a human figure—a bride—the center of the paradisal scene. Who is this woman in white? There are several possibilities:

We need not choose a single interpretation; all three (and more besides) can be held at once, as different facets of a rich biblical image: that of the bride.

The artistic highlight of the church is the set of three murals by the famous poet and filmmaker Jean Cocteau in the Lady’s Chapel to the left of the high altar. When I visited, the glass doors of this side chapel were locked—apparently they always are when then chapel is not in use, to prevent vandalism.

The left wall of the chapel depicts a traditional Annunciation scene with angel and lily vase. Mary internalizes the message that has just been brought to her, mentally and spiritually preparing herself to receive the Word of God into her womb. 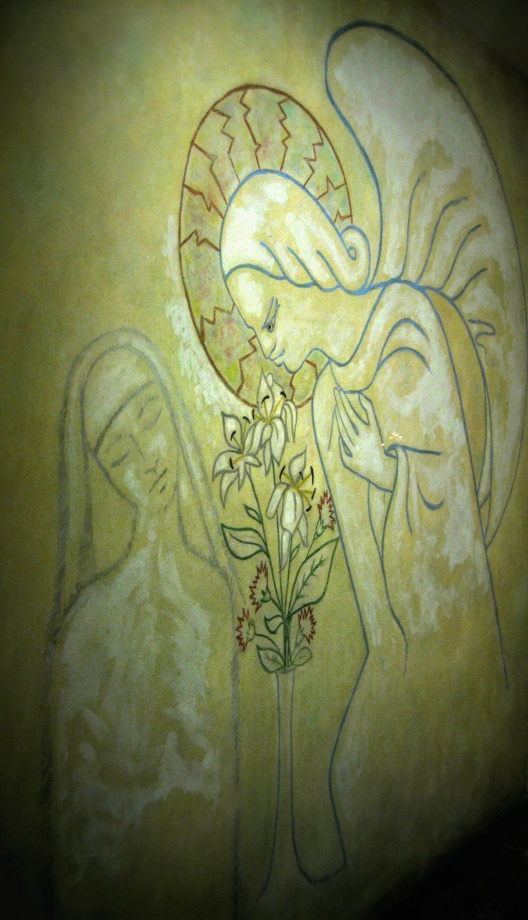 The right wall depicts the Assumption of Mary, a Catholic dogma that teaches that at the end of her earthly life, Mary was taken up, body and soul, into heaven—shown here accompanied by angelic fanfare.

The main wall of the chapel depicts a Crucifixion scene. Because of the door rims and handles and the glare on the glass, it was impossible for me to get a full-view shot of this mural, but I put together a composite of three photos that will give you an idea of what it looks like in total. (Keep in mind that this wall is curved and that I took the photos at different angles, so the lines don’t match up perfectly.) Click on the photo for an enlarged view.

At the left, two Roman soldiers roll dice to see who will get to keep Jesus’s garment, and John clasps his hands together in anguished prayer. Cocteau painted himself into the foreground of this grouping, his face turned away with a quizzical expression that it is difficult to read. Is he holding back tears? Does he disbelieve what is happening?

The center section of this mural is the most arresting. Unique in the history of crucifixion paintings, this one excludes Jesus’s torso, arms, and head from the frame. Only his feet are visible and in fact become the central point of focus. Drops of blood, like tears, flow out from his puncture wound and through the eyes of his mother. This repeated motif emphasizes how Mary shares in the suffering of her son—she closes her eyes and feels it fully, as any mother would.

Notice how Cocteau styled the droplets: they have a jewel-like quality about them, and so they beautify their subjects. They also suggest that Jesus’s suffering has value; it shines and it glistens. It nourishes too—that is, the blood-tears water a rose at the base of the cross. The world takes Jesus’s life, and he gives life back to the world; his blood flowers into salvation, full and free.

(Related post: For an article on rose symbolism attached to Christ, see “Jesus, the ‘Forever-Blooming’ Rose.”)

Mourning along with Jesus’s mother are the two other Marys mentioned in the Gospel accounts as having attended his execution. One (who I take to be Mary Magdalene) turns away, unable to watch, and the other turns her eyes toward heaven, as if to say, “God, where are you?” Cocteau unites these women in their sorrow by having their veils merge into each other—a single piece of fabric connecting mother and dear friend. Even the sun mourns over the dying Christ, having turned black. This is likely a reference to the eclipse that occurred on the afternoon of the Crucifixion. 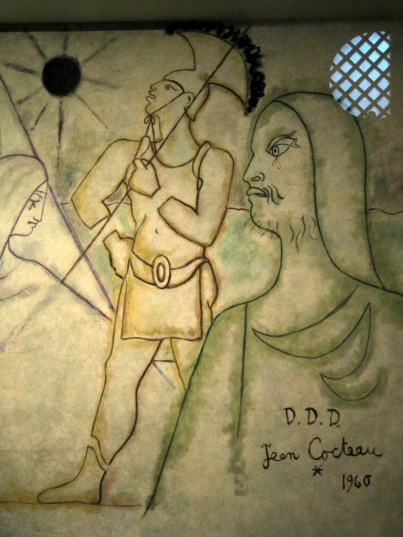 On the outskirts of the scene stands a mysterious figure with a fish-shaped eye. Perhaps it is Jesus himself, out of body, observing with gentle sadness all that the world has come to. Or else maybe it’s an absent disciple, envisioning with regret the fateful last day of the master whom he had abandoned.

Above his signature Cocteau inscribed the initials “D.D.D.,” which might stand for Deo Donum Dedit (“Given and Dedicated to God”). He also dated the work “1960,” even though it was completed over a short period of two weeks in November 1959. He may have just wanted a nice round number, or maybe he thought of the mural as his New Year’s gift to the Marist community.

As Cocteau worked on this project, he spoke to the characters he painted. For instance, one observer recounts hearing him tell the Virgin of the Annunciation,

O you, most beautiful of women, loveliest of God’s creatures, you were the best loved. So I want you to be my best piece of work too. . . . I am drawing you with light strokes. . . . You are the yet unfinished work of Grace. [qtd. by ACE Trust]

When he finished the commission, he said he was sorry to leave the wall of that chapel that had “drawn me into another world.”

Also in the Lady’s Chapel is a Portland stone altar decorated in mosaic by Boris Anrep, depicting the birth of Christ. Anrep used brightly colored Venetian enamel to outline the figures and filled them in with dull-colored stone, the effect being, he said, that

they lose their earthly aspect, they become less opaque, their transparency, acquired by this means, “distils,” so to speak, the image, giving it an ethereal aspect, free from all matter . . . a most important quality in religious art. My intention was to render in the mosaic the tenderness and the gentleness inherent in the subject. This intention inspired my work. [Source: A placard in the church. Translated from an article by the artist published in L’Echo de Notre Dame de France, June-July 1955.]

All photos in this post are © 2013 by Victoria Emily Jones. You are welcome to use them for noncommercial purposes, but if you do, I ask that you please cite this page as the source.

6 Responses to The Art of Notre Dame de France, London