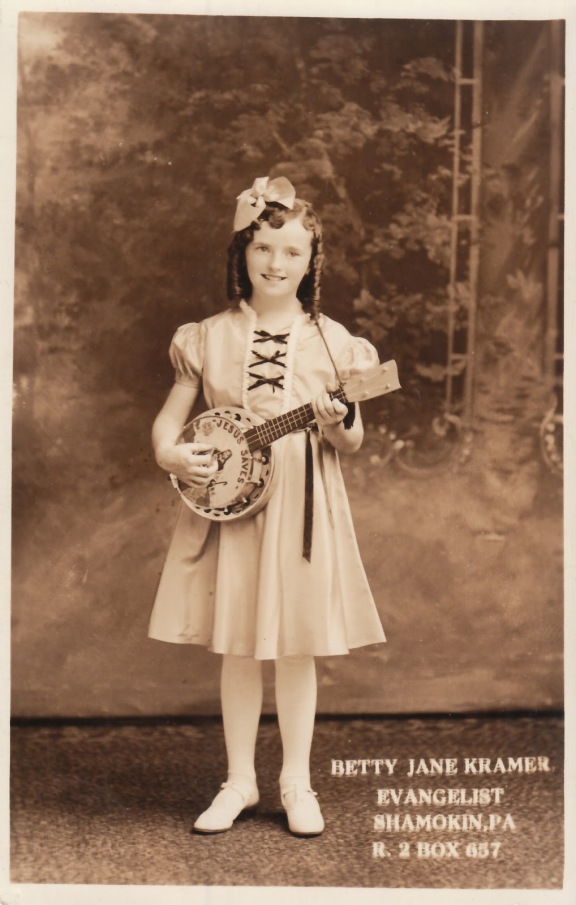 This 1938 postcard is from the collection of Jim Linderman, who created and maintains the blog Old Time Religion as a catalog of all the vintage religious literature, advertisements, photographs, toys, and other ephemera he has collected over the years.

The photo shows the child evangelist Betty Jane Kramer of Shamokin, Pennsylvania, holding an F chord on her banjo ukulele. I did some digging and found out that Kramer was born in 1931, so she is seven years old in this photo. In 1959 she married Forrest J. Kerstetter and with him started the Kerstetter Family Music Ministry, a southern gospel group that traveled the east coast, sharing the Good News through music and testimony. She continued this ministry all the way until her death in 1993, after which her son, daughter-in-law, and nephews continued to carry it on. In 2001 she was posthumously inducted into the Pennsylvania Southern Gospel Hall of Fame.

Here’s a sampling of some other “old-time religion” ephemera that you might enjoy from Linderman’s collection: