I was walking back to St. Catherine’s College after a day of sightseeing around the city. Walking down Cross Street, almost back to the dorm, I still had twenty minutes until dinner in the dining hall. How about a quick ramble through this graveyard to my right, I thought.

Tucked away behind the twelfth-century St. Cross Church, the graveyard is full—and I mean full—of crosses. And of such variety! Many, of course, are standard Latin crosses, but many are wheel-headed (Celtic), and some are even X-shaped (saltires). Some have concave arms (cross pattées), others have discs attached at the ends (budded).

My favorites are the ones with braided and interlaced patterns.

Some of the crosses have settled in a sideways tilt, and most are overrun at the bottom with wild grasses and brush. (The cemetery is a wildlife sanctuary, I later found out.)

In place of a crucified Christ, some of the crosses have a set of three flowers growing up the beam, all budding from the same stem, proclaiming the Trinitarian nature of God and the involvement of all three of his persons in the redemptive work at Calvary. I was so moved by this simple symbol, which speaks of new life, of growth, of tender love and care, of the resurrection of Christ and the saints, of ugliness redeemed and transformed into beauty. God’s grace flowered at the spot where Jesus died and flowers too in the hearts of those who look to the cross for salvation. 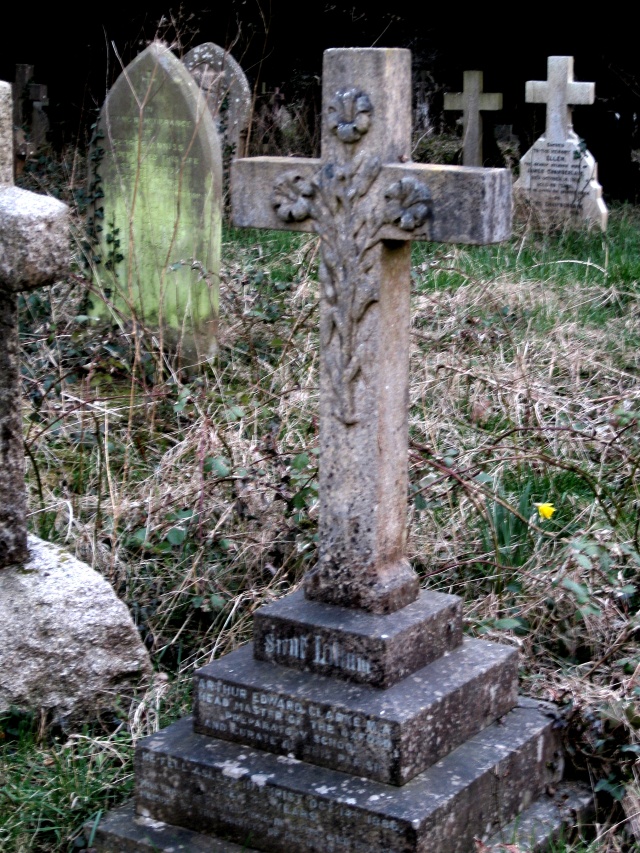 One of the tallest gravestones in the yard, and one of the few narrative ones, is this one:

Divided into four scenes, it depicts most prominently, at the top, the crucifixion of Christ. Two birds peck at a cluster of grapes above his head, which has several symbolic possibilities: It could allude to the wrath of God being poured out on Christ, our sin-bearer—for elsewhere in Scripture (Revelation 14:17-20), God’s wrath is compared to a winepress that crushes sin. Or perhaps it’s meant to hark back to Jesus’s teaching that he is the vine, and we are the branches, and that we can bear fruit only when we abide in him (John 15:5-8). The most obvious association, though, is the Eucharist—Christ’s blood spilled out for mankind. The grapes can be and say all these things at the same time.

Stars sweep in around Christ’s outstretched arms, calling him back up to heaven. They speak of glory, and mystery, and light in the darkness. 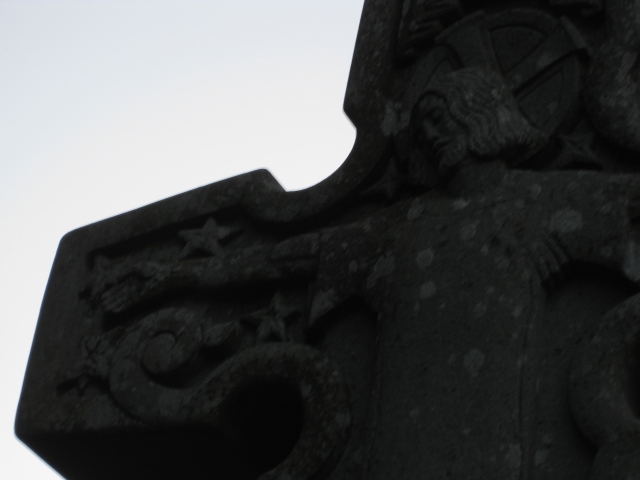 I can’t tell what the other three scenes are. The second one from the top looks like the Visitation (of the pregnant Mary with her cousin Elizabeth), and the bottom one looks like a fallen angel—but I’m not sure what particular relevance those stories would have to this deceased individual; they seem odd choices for a funerary monument. My husband suggested that maybe the bottom panel shows an angel swooping down to fetch the soul of the deceased and bring it up to God . . . which seems more reasonable.

The third panel down depicts two haloed church leaders in conversation with one another—a bishop (he’s holding a crosier) and a scholar/writer (he’s holding a scroll) . . . perhaps Peter and Paul? 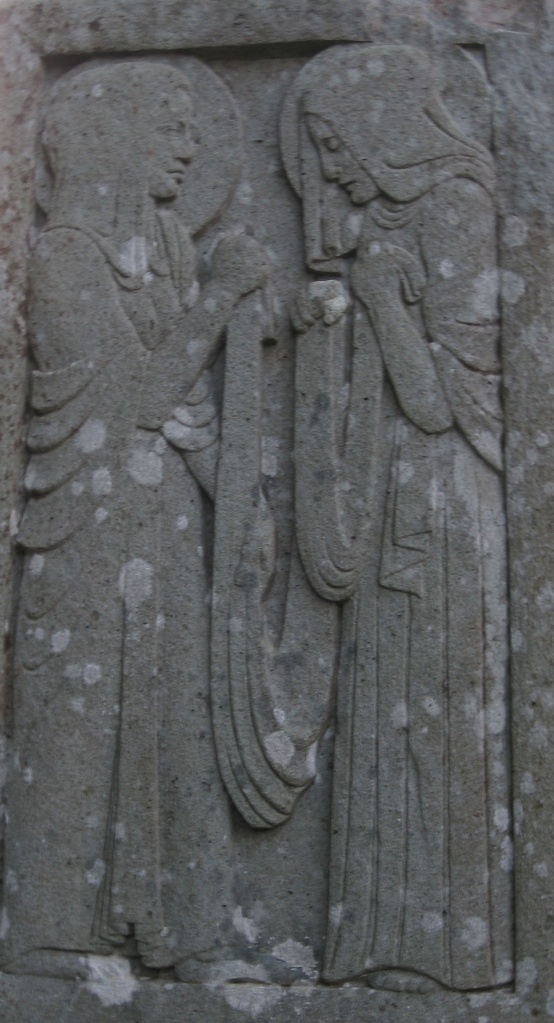 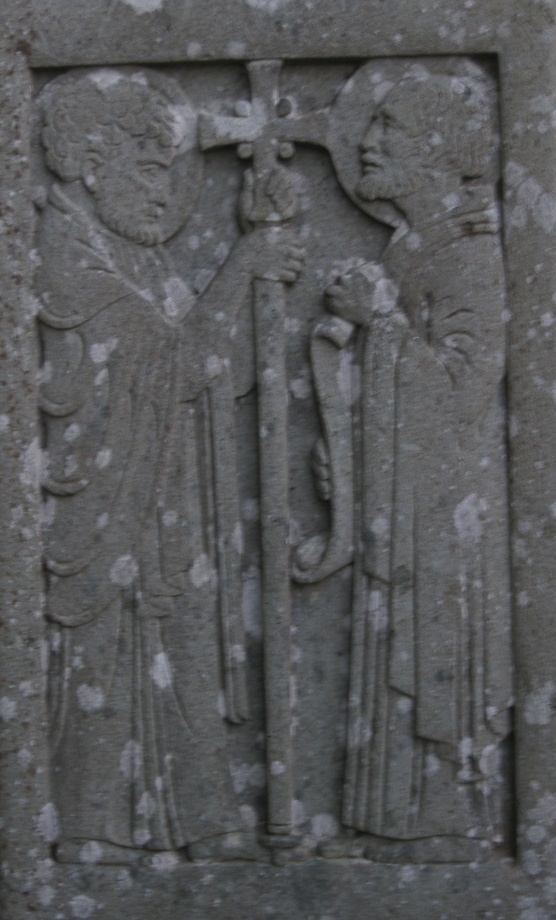 As dusk settled and I traipsed along back toward the gate, I thought a lot about the promise of the cross, and what the cross may signify to those who visit these stones to remember those buried beneath. Victory, I thought. The cross means “victory.” Though an instrument of death, the cross, to the Christian, just as fully signifies life—because God used the cross to defeat death. And his victory is ours. Just as his death was followed by resurrection, so will be ours.

I’m afraid my amateur photos really don’t do justice to the beauty of this place. A Flickr search for “Holywell Cemetery” yields much more pleasing results.

The majority of the gravestones, from what I could tell, date from the second half of the nineteenth century through the first half of the twentieth.

This entry was posted in Western Art and tagged cemetery in oxford, crosses in cemetery, funerary art, graveyard photography, tombstones. Bookmark the permalink.

2 Responses to A Hidden Gem in Oxford: Holywell Cemetery