This is part 5 of a series on John Milton’s poem “On the Morning of Christ’s Nativity.” Read part 1 here. Read the complete poem here.

XIII.
Ring out, ye crystal spheres!1
Once bless our human ears,
If ye have power to touch our senses2 so;
And let your silver chime
Move in melodious time;
And let the bass of heaven’s deep organ blow;
And with your ninefold harmony3
Make up full consort of the angelic symphony.

XIV.
For, if such holy song
Enwrap our fancy long,
Time will run back and fetch the Age of Gold;4
And speckled Vanity
Will sicken soon and die,
And leprous Sin will melt from earthly mould;
And Hell itself will pass away,
And leave her dolorous mansions of the peering day.

XV.
Yes, Truth and Justice then
Will down return to men,
The enamelled arras of the rainbow wearing;
And Mercy set between,
Throned in celestial sheen,
With radiant feet the tissued clouds down steering;
And Heaven, as at some festival,
Will open wide the gates of her high palace-hall.

XVI.
But wisest Fate says No,
This must not yet be so;
The Babe lies yet in smiling infancy
That on the bitter cross
Must redeem our loss,
So both himself and us to glorify:
Yet first, to those chained in sleep,
The wakeful trump of doom must thunder through the deep,

XVII.
With such a horrid clang
As on Mount Sinai rang,5
While the red fire and smouldering clouds outbrake:
The aged Earth, aghast
With terror of that blast,
Shall from the surface to the centre shake,
When, at the world’s last session,
The dreadful Judge in middle air shall spread his throne.

XVIII.
And then at last our bliss
Full and perfect is,
But now begins; for from this happy day
The Old Dragon under ground,
In straiter limits bound,
Not half so far casts his usurpèd sway,
And, wroth to see his Kingdom fail,
Swindges6 the scaly horror of his folded tail. 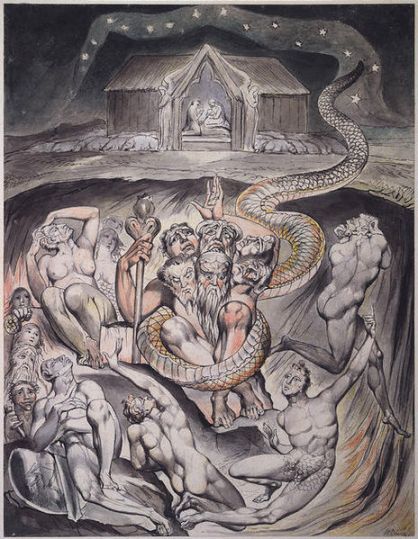 1. ^ crystal spheres: The geocentric model of the universe developed by Aristotle, Ptolemy, and others posited that Earth was surrounded by concentric spheres containing planets and stars in orbit and made up of a transparent fifth element. This view dominated until around 1700, when Copernicus’s heliocentric model gained wider acceptance.

2. ^ power to touch our senses: [Note by Alison Moe and Thomas H. Luxon] This line alludes to the Pythagorean notion that the celestial spheres make music as they turn, a music mortals cannot normally hear. The notion is elaborated by Lorenzo in Shakespeare’s Merchant of Venice 5.1: “There’s not the smallest orb which thou behold’st / But in his motion like an angel sings, / Still quiring to the young-eyed cherubins; / Such harmony is in immortal souls; / But whilst this muddy vesture of decay / Doth grossly close it in, we cannot hear it.” See musica universalis.

3. ^ ninefold harmony: Most geocentric models assigned nine spheres from Earth outward: the Moon, Mercury, Venus, the Sun, Mars, Jupiter, Saturn, the Fixed Stars, and the Primum Mobile (the Sphere of the Prime Mover). This order was used by Dante in his fourteenth-century epic poem The Divine Comedy (see William Blake’s illustration The Deity, from Whom Proceed the Nine Spheres).

4. ^ Age of Gold: According to Greek mythology, the Golden Age was the first period of man, when everything was happy, humans lived in harmony with the gods, and it was always springtime. This period ended when Zeus defeated the Titans. In 37 BC, the Roman poet Virgil wrote in his fourth Eclogue that a new Golden Age of peace and justice was about to return with the birth of a child. Some people see this as his prophesying the birth of Jesus.

Stanza 13: Stars and planets, in your orbits, join the angels’ song!

Stanza 14: If you do, the sound will be so overpowering that Vanity, Sin, and Hell will shrink away and die,

Stanza 15: leaving vacant their thrones so that Truth, Justice, and Mercy can sweep in and establish their reign on Earth.

Stanza 16: But wait! God in his providence deems it necessary to delay such a glorious overthrow, for a brief infant visit will not suffice to bring about mankind’s redemption. God-as-man must taste the bitterness of a Roman cross. Then he must return

Stanza 17: to judge the living and the dead, and to establish his lordship over all.

Stanza 18: Only then will our bliss be perfect and full. And Jesus’s birth initiates this process. Having come into the world, he restrains the devil from exercising full authority over man—in response to which the devil beats his scaly tail, angry that his rule is being threatened.

This entry was posted in Poetry, Western Art and tagged dante's cosmology, music of the spheres, ptolemaic universe, satan as dragon, the old dragon, virgil's fourth eclogue. Bookmark the permalink.