‘Jesus is my air Plane’

Sister Gertrude Morgan (1900–1980) was a poet, a preacher, an artist, and a singer who loved Jesus.  She called him her husband, her doctor, and her airplane (yes, airplane), and claimed to have met with him in visions throughout her mid- and later life.

Born on a farm in Alabama, Sister Gertrude left school after third grade so that she could help her family with the farm work.  When she was 18, she moved to Georgia and became a nursemaid.  She also became an active member of Rose Hill Memorial Baptist Church, which is where “God moved me and had me to sanctify my life for him.”

On December 30, 1934, Sister Gertrude received her first divine revelation, which she describes with an inscription on her painting 1324 No Ave Columbus GA.:  “God called me a chosed me and turned me into the hands of his son, and JESUS said take up your cross and follow me.”  That cross was the command to “go and preach—tell it to the world!”  Sister Gertrude immediately took to the streets and started preaching.

Then after another revelation in 1939, Sister Gertrude moved to New Orleans—the “headquarters of sin,” as she called it.  There she founded a mission and an orphanage, and of course continued her preaching.

It wasn’t until 1956, when she was in her mid-fifties, that she took up painting.  One of her favorite subjects to paint was her wedding day—with Jesus as groom, that is.  While the Bible talks about the church’s coming marriage to Christ in heaven (the marriage supper of the Lamb), Sister Gertrude believed that she received a special anointing as the bride of Christ in 1957.  From that day forward, she wore only white, and she often painted herself standing beside a chubby white Jesus in a wedding tuxedo. 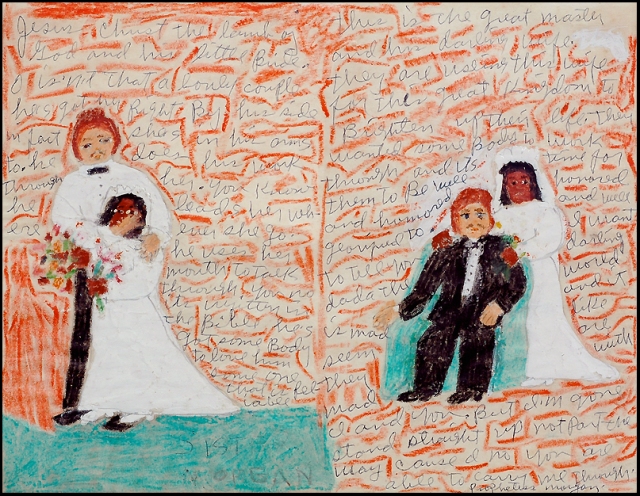 Sister Gertrude painted on whatever she could find:  doors, Styrofoam food trays, detergent boxes, paper, window and lamp shades, even toilet paper rolls.  She painted her guitar case and her cardboard megaphones.  Everything, to her, was a blank canvas waiting to be filled with color and the truth of the gospel.  Her materials were very basic—acrylic or tempera paint, ink pens, crayons, and pencils—and she used them to fill up every inch of space on her picture plane with words and images that would tell the story of Jesus and illustrate his vision for humanity.  Or that would characterize him through her eyes, and express a prayer of her heart.

My favorite painting of Sister Gertrude’s is Jesus is my air Plane.  She used and illustrated this phrase a lot (see variations here, here, and here), though art historian Jim Linderman pointed out that it was not her own invention, but was most likely appropriated from a song recorded by Mother McCollum in 1930, called “Jesus is My Air-O-Plane.”

The inscriptions on the painting are as follows:

Sister Gertrude explained the airplane image in a letter to Reginia Perry in 1972:

“I Realize time is flying, as Jesus had me to give a message to the world telling them time is flying, and after that he taken my hand and Begin to draw a air Plane, and him and I in the Plane.”

The airplane metaphor is a little muddy to me, but that’s OK.  Because Sister Gertrude didn’t create art for the purpose of critical analysis; in fact, she didn’t consider her paintings to be art at all.  Rather, they were for her a spontaneous overflow of what she was thinking and praying and feeling at that particular moment, guided, she said, by God.  She said that it wasn’t always her creating the shapes and pictures, it was God moving her hands, and in some cases, she didn’t even know what she was drawing until it was finished.

As for this particular credo of hers (“Jesus is my airplane”), I see it as meaning that Jesus lifts us up, holds us up, and carries us.  He weathers storms with us and brings us places in our lives, including our ultimate destination:  the Promised Land (heaven). 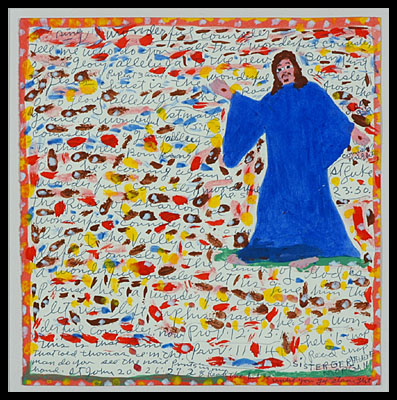 Sister Gertrude’s art has been classified as outsider art, visionary art, and folk art, three often-interrelated terms that don’t really have agreed-upon definitions.  Broadly speaking (and there are exceptions), what ties them together is that the artists are untrained in and unfamiliar with the art world, and thus their art is untainted by considerations of competition, acclaim, and social promotion (see Raw Vision magazine’s “What is Outsider Art?”).  It is art that is raw and intuitive, because it exists outside of the mainstream.  One art dealer said that anyone who calls himself an outside artist is not one, for a true outside artist would have never heard of the term.

William Fagaly, curator of African Art for the New Orleans Museum of Art, describes what distinguishes a self-taught artist:

“Often, he or she creates from an inner drive, working from intuition to create unique visions expressed in a spontaneous, direct or raw fashion. … There is a certain liberty in these artists’ lack of conventional training. They are unencumbered by preconceived ideas or models, and arrive at their own styles and methods through personal expression rather than by looking at the works of other artists.”

Outsider art is the kind of art that when you see it, you probably think, “I could do that,” or “that’s not art!”  Sister Gertrude’s paintings definitely lack technique; they pay no regard to perspective or depth or dimension.  But their childlike aesthetic is exactly what makes them endearing.  To me, her art beautiful, but in a much different way than other art.  It’s beautiful in that it’s sweet—painting after painting shows her dwelling side by side with Jesus, as his wife, his medical assistant (she called herself “nurse to Dr. Jesus,” because 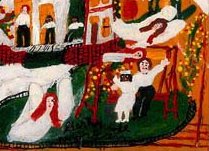 she helped him heal sick souls), and his pal.  In New Jerusalem from the Prayer Room, she and Jesus are even shown smiling together on a set of swings (see detail at right).  Her paintings depict an embodied relationship with Christ, as opposed to just his Spirit, and remind me of that old gospel song “Just a Closer Walk with Thee.”  Oh how close she walked!

Her art is also beautiful in how it conveys such a pure and fervent longing for the coming of God’s kingdom on Earth right now.  (The New Jerusalem was one of her most oft-treated subjects.)  Each of her paintings is full of vision and hope, and confidence in the Christ who has promised to fulfill both.

Although Sister Gertrude was incredibly prolific, few of her artworks have been posted online.  However, here are a few of her depictions of Jesus that I was able to dredge up:

Not only did Sister Gertrude write and paint and speak gospel truths; she also sang them—in her home, in the streets, at the mission, at the market, and anywhere she went.  Then in the ’60s, after catching the attention of New Orleans art dealer Larry Borenstein, in galleries, alongside showings of her work.

In 1970, at the urging of Borenstein, she recorded her first and only album, called Let’s Make a Record.  Accompanied only by a tambourine, Sister Gertrude sings such songs as “I Got the New World in My View,” “Power,” and “Take My Hand, Lead Me On.”  Like her paintings, her songs have an improvisatory, inspired feel, and they function as both prayers and sermons.  One of my favorites from the album is “If You Live Like Jesus Told You.”  (Follow the link to listen to the full song as well as others from the album.)

Sister Gertrude died in 1980, but her immortal soul lives on in heaven, and little pieces of it live on here, in her paintings, poetry, and music.  In 2004, the American Folk Art Museum in Manhattan hosted an exhibition of her work, entitled “Tools of Her Ministry: The Art of Sister Gertrude Morgan,” which traveled to the New Orleans Museum of Art the following year.  Concurrently, in 2005, Philadelphia DJ King Britt released the album King Britt Presents Sister Gertrude Morgan, an electronic remix of Sister Gertrude’s original vocals.  Britt said that he was “blown away by the emotion she had,” and was attracted to the honesty of her voice and the hopefulness of her message.

I love the raw simplicity of Sister Gertrude’s arts (visual, literary, and musical), and how in them she makes Jesus her own, and bares her soul through them.  I love the combination of image and word to create a testimony that’s both visual and verbal.  I can only imagine how happy she must be now, to be buzzing around heaven with her Airplane Jesus.