Several months ago I watched a BBC documentary series by Oxford professor Diarmaid MacCulloch, called A History of Christianity. In the first DVD, MacCulloch travels to China and discusses, on site in Xian, the existence of a Christian community that flourished there in the seventh century, and contributed greatly to the faith.

The fact that Christianity had taken root in China as early as the 600s was news to me. Of course I had always known that Christianity started in Asia, but when I reflect on its origins, I tend to follow the strand that traveled straight from the Near East to Rome, forgetting that Christianity also spread out in other directions and developed unique forms among those cultures in which it landed. The European Christianity out of which American Christianity grew is only one of many Christian traditions that span the globe, and by no means the “truest” or most authoritative version, even though it wields the most power.

After viewing the documentary, I wanted to find out more about how Christianity came to China, and especially about the so-called “Jesus Sutras” on which the early Chinese Christians based their understanding of Christ. My main source of information is Martin Palmer’s book The Jesus Sutras: Rediscovering the Lost Scrolls of Taoist Christianity.

The Da Qin pagoda was erected in 781 in Xian as an add-on to the Christian monastery that had been built there in 640. The persecution of Christians led to its abandonment in 845. 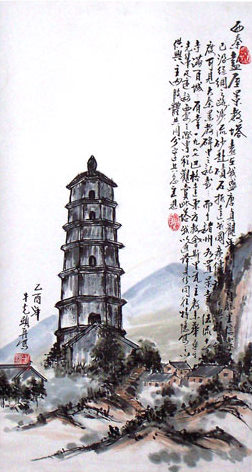 This painting was done by Niu Guang Xian in 2005. The calligraphy at the right explains the history of the pagoda and how he served as translator for a visiting group of Christians in 1997. It concludes, “I have written this as an offering to the Body of our Lord, to share together and remember His grace.”

The Jesus Sutras, in a nutshell, are a set of eight Chinese scrolls from the seventh and eighth centuries that combine the teachings of Jesus with the principles of Eastern thought.  They are based on the second-century Syriac text Teachings of the Apostles, which Persian missionaries brought to China around 635 AD and translated into Chinese, with the financial support of the emperor. But rather than doing a straight translation, the missionaries incorporated elements of Taoist and Buddhist spirituality, which they had learned from the people they had met along their 3,000-mile Silk Road journey. They wanted to share Jesus with the Chinese, but they wanted to place him in a context that they would understand and appreciate.

Palmer puts it this way:

Instead of doing what many missionaries have tried to do—namely, make people adapt to a Western mind-set of original sin and the classic death-resurrection model—these teachings take seriously the spiritual concerns of China and offer Jesus and his teachings as a solution to these issues. These Sutras enter directly into the challenge of the Chinese worldview, bringing salvation to the people rather than trying to reconfigure their entire worldview. (175)

This sort of spiritual fusion raises many questions. Namely, is the gospel of Jesus being compromised so that it can fit into a framework that’s already in place? How can the canonical Christian scriptures, which grew out of Hebraic and Greco-Roman cultural contexts, apply to people of different times, places, and backgrounds? Should doctrine be fixed or fluid? Where’s the line between contextualization and syncretism? 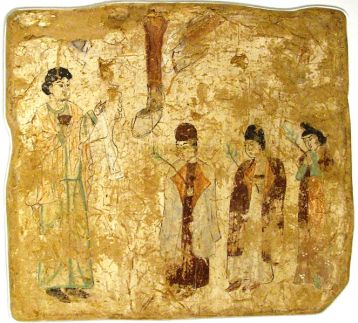 Christian priests in a procession on Palm Sunday, in a 7th- or 8th-century wall painting from a church in China.

The translation of Christian scriptures into Chinese for the first time posed a challenge for the translators, seeing as the Chinese believed in karma rather than sin, and in reincarnation rather than heaven or hell. They weren’t asking, as Western theology presupposes, “How can I be freed from sin?” Instead, they viewed desire as their main enslaver, and sought release from the endless cycle of suffering it causes. The Persians, in their translation work, did make an effort to explain the concept of a triune God, and what separates man from said God (sin), and why the death of the second person of the Godhead was necessary (atonement), but they also addressed the existential concerns of the Chinese, answering questions that Westerners don’t think to ask. The Sutras present Jesus as a savior—not only a savior from sin but from the hopelessness of perpetual existence in this world.

Here’s a timeline that breaks down the relevant chronology. I’ve set some key names and places in boldface:

The Jesus Sutras are held today in private collections in France and Japan, largely inaccessible to the public. It’s a real shame that so little information can be found about them online. I’d really like to change that. The Sutras are a rich and beautiful body of spiritual writings, and I hope that you check back regularly as I delve deeper into them.

Read Part 2: The Religion of Light.

This entry was posted in Theology and tagged christianity in china, da qin pagoda. Bookmark the permalink.