Scottish artist David Mach has a major biblical-themed exhibition going on now at the City Art Centre in Edinburgh to commemorate the 400th anniversary of the King James Bible.  It’s called “Precious Light,” and it’s made up of more than 70 collages and six sculptures, taken from some of the Bible’s most epic stories.

Mach admits that he is not religious, but he is intrigued, he says, by the heavy, emotion-packed content of the Christian Bible, and its true-to-life portrayal of the human drama.  “The Bible has it all—war, famine, sex, death, pestilence, jealousy, revenge. … Struggle, pain, love death—it’s all in there,” he said (here and here).  “As an artist I think I would struggle to find a richer source of inspiration. … No single text has had such a profound effect on our language, culture, and thoughts as this book.”

The most compelling event chronicled in the Bible, the one to which all earlier stories point, is the crucifixion of Jesus.

David Mach, “Die Harder,” 2010. This photo was taken by the Daily Mail in July 2010, outside of St. Giles’ Church in Edinburgh. The piece is now on exhibit on the second floor of the Edinburgh City Art Centre.

The crucifix pictured above is unique in that it is made not of marble, bronze, or terracotta, but of repurposed coat hangers, welded together around a plastic positive and then nickel-plated.  “We use [coat hangers] as contours to describe the shape of something,” Mach said of his method.  “When we see those thousands of hooks that appear in such a construction, we provide our sculpture with an aura—a double image, something that is difficult to read and to see. … The hooks also provide a kind of movement.  The sculpture might look as if it has a vibration or, at any rate, it animates the sculpture.”

Die Harder screams pain—the pain of nails, whips, and spears; the pain of being rejected and misunderstood; the pain of sin; and most of all, the pain of being separated from the Father.  Lest we think that Jesus suffered silently on the cross and then slipped peacefully into the Father’s arms, Mach reminds us of the horrors he underwent on behalf of the world that hung him there.

In addition to this standalone crucifix, the exhibition also features a sculptural version of Golgotha, with three similarly spike-bristled figures, contorted in pain and pinned to steel girders. 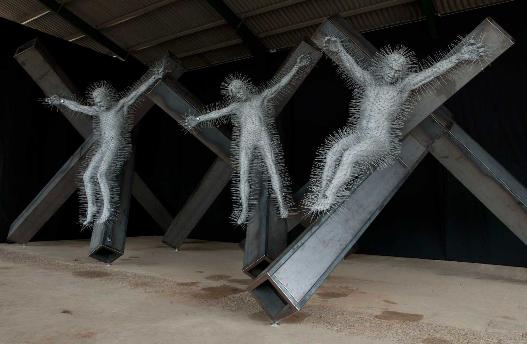 Not only does Mach create sculptures from coat hangers, he also uses unstruck match heads. 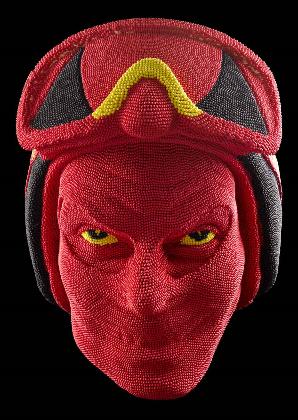 Mach likes to make live performance part of his art, so last Thursday (August 4), he burnt the devil match-head sculpture in front of a cheering crowd.  I haven’t heard yet whether he plans to burn the Jesus sculpture, but I would venture to assume “yes.”  “The act of burning does not destroy the work but is in fact an act of creation,” he wrote.  “The sculptures remain completely intact but they lose their colour in the fire and emerge as more somber shades of black and grey and age a hundred years in a few seconds.”

Mach’s wish for this exhibition was to present a fresh, contemporary perspective on the King James Bible.  I’ve highlighted his sculptural works, but the majority of the exhibition consists of large-scale collages, with photographs of famous landmarks and cityscapes serving as the background for hundreds of overlapping figures, cut out from magazines and other print media.  The few that are available online for viewing, I find very intriguing in their level of denseness and detail.  I only wish that I could see them in person, because I know that a flat, 14-inch computer monitor can do no justice to colossal works of 3-D art.  Would anyone like to take me to Scotland sometime this month or next?  Or alternatively, if you’re planning on stopping by Edinburgh yourself, would you mind picking me up an exhibition book for $56.9003?

As the exhibition reminds viewers, the King James Bible was a Scottish commission.  It was at the General Assembly of the Kirk in Fife at Burntisland in 1601 that the project to create an authoritative translation of the Bible actually began, in response to the petition of King James’s Scottish subjects.  James took the project south with him when he became King of England two years later.

“Precious Light” is running from July 30 to October 16.  Mach’s final collage, The Last Supper (which he is still working on), will be unveiled September 20.  You can view some of the works from the exhibition at davidmach.com.