Jesus Is a Taco 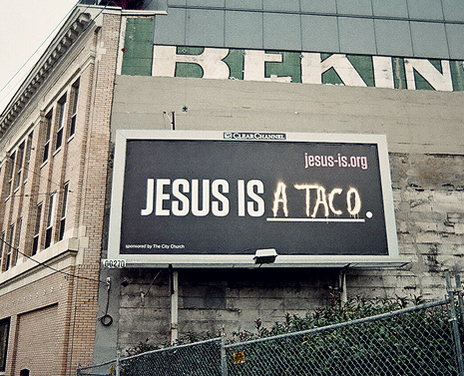 The City Church in Seattle launched a campaign last September called “Jesus Is ___,” which ran in tandem with a seven-part sermon series of the same name.  The goal was to prompt people to think about who Jesus is to them.  One of the campaign’s main components was a website, jesus-is.org, which is still up and running, inviting visitors to “fill in the blank.”

Here are some of the submissions:

This is only a small sampling of the tens of thousands of comments you can find on the site, with new ones pouring in every minute.  As you can see, they cover a vast range of attitudes and opinions, from the hyper-religious to the skeptical to the silly to the downright bitter and nasty.  It’s an interesting study in pop culture and psychology, as it gives you a feel for why people cling to Jesus, or dismiss him, hate him, or love him.

“We felt that the best approach to getting Jesus on the mind of Seattle was not telling them what they should believe, but encouraging them to think about what they believed,” said Justin Jaquith, the church’s communications manager.  “Very early in the planning stages we debated the potential consequences of opening up such a dialog with non-Christians, and concluded that negativity—even what some would term blasphemy—is better than indifference, because at least they are thinking about Jesus.”

How would you fill in the blank?

This entry was posted in Who is Jesus? and tagged jesus is campaign. Bookmark the permalink.

1 Response to Jesus Is a Taco