What do you get when you cross a Ringling Brother and a Flower Child? 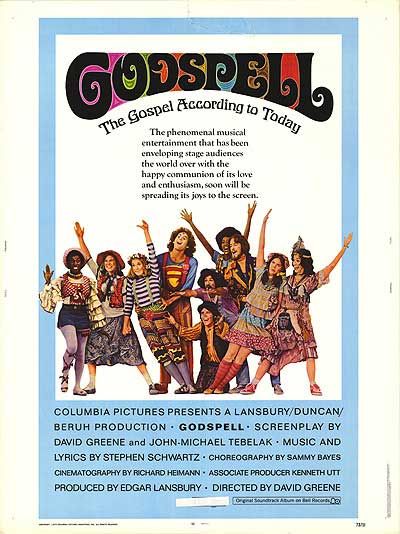 The original movie poster: “The phenomenal musical entertainment that has been enveloping stage audiences the world over with the happy communion of its love and enthusiasm, soon will be spreading its joys to the screen.”

I’m talking about the Jesus of the 1973 film Godspell, based on the off-Broadway musical by John-Michael Tebelak.  He’s by far the happiest Jesus I’ve ever seen onscreen; he skips and frolics about through New York City, blowing bubbles, twirling a yo-yo, conversing with finger puppets, picking flowers, giving hugs, dancing soft-shoe, and poking fun at the high and mighty, all in the company of his ragtag group of disciples, who enact his parables using random props and noises.  This Godspell Jesus, played in the film by Victor Garber, is a clown—frizzy clown hair, floppy clown shoes, paint on his face, and a pair of suspenders to hold up his rainbow-colored pants.  He’s also a peace-loving hippie.

The upbeat mood of the film is captured well in this short compilation of clips, set to the song “We Beseech Thee” (the song was cut from the movie):

“This movie makes me happy,” wrote one YouTube commenter.  “There’s just something smile inducing about the idea of Jesus with an afro and clown shoes.”  Smile-inducing indeed.  One might wonder whether the film was meant as one big joke.

Stephen Schwartz, who wrote the music and lyrics for the film, has answered strongly in the negative.  At a 2010 Q&A forum, Schwartz was asked whether the intention of Godspell was to mock Christianity; he responded that on the contrary, the intention was to try to tap into Christianity’s true spirit, to distill its essence, which is joy.  Godspell was a serious attempt to convey the message of the Gospels, he said, but it also finds humor in those Gospels and in the responses of human beings to them. 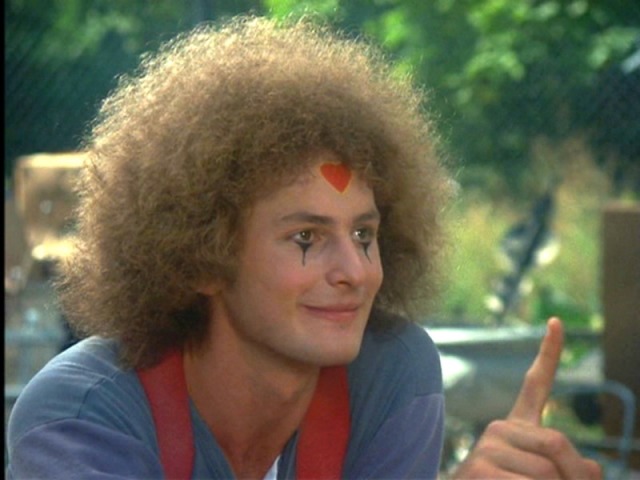 Tebelak, who developed the concept and initial script of Godspell, said that the first time he sat down and actually read the Gospels all the way through, he was struck by the “great joy,” “simplicity,” and “comforting words” they contained.  His decision to adapt them to a stage play came after a negative experience at a sunrise Easter service, at which everyone seemed to be gloomy and depressed and he, in his overalls, felt excluded (upon leaving, he was frisked for drugs in the parking lot by a policeman congregant):

“When I went into the cathedral, everyone there was sitting, grumbling about the snow, and the fact that they had already changed their tires. … As the service began, I thought it might be a little different.  Instead, an old priest came out and mumbled in a microphone, and people mumbled things back, and then everyone got up and left.  Instead of ‘healing’ the burden, or resurrecting the Christ, it seems those people had pushed Him back into the tomb. … I went home and realized what I wanted to do with the Gospels:  I wanted to make it the simple, joyful message that I felt the first time I read them and recreate the sense of community.”

Another major inspiration for the script was the essay “The Feast of Fools” by Harvard theologian Harvey Cox.  Cox, whom Tebelak admired, espoused a spirituality of festivity: “In a success and money oriented society, we need a rebirth of patently unproductive festivity and expressive celebration. … we need a renaissance of the spirit.”  Godspell was Tebelak’s attempt to revive Christianity, which in his mind had become dead and joyless.  The word “Godspell,” after all, is an Old English derivation of the Greek word euangelion (“good message,” or “good news”), from which we get our English word “gospel.”  As its etymology indicates, the gospel of Jesus is intrinsically good, exciting, and joyful.  So why are Christians and their church services so often dull and tiresome?

My favorite song from the movie is “All for the Best,” sung as a duet by Jesus and Judas.  It’s happy, silly, and chirpy, full of vaudevillian humor and everything that musical-haters hate, and it epitomizes the Godspell spirit.  Unfortunately, the quality of this video is awful, but here it is:

(For a recent choreographic interpretation of this song, see this Tyce Diorio number [2:00-3:48], performed by Katee Shean and Joshua Allen on Season 4 of So You Think You Can Dance.  One of my favorites!)

I highly doubt that Jesus was this silly.  Exuberant, yes.  Ridiculous and clownlike, no.  But then again, I can’t think of any Bible verses that would blatantly contradict this picture of him.  I suppose that I don’t think of him as a total jokester because people marveled at the authority with which he spoke (Matthew 7:28-29), and many considered him a prophet (Matthew 16:13-14).  How could a buffoon have commanded so much respect and worship?  I believe that Jesus was fun and engaging, and that he taught the virtues of love, joy, and hope (1 Corinthians 13:13), but I think that Godspell goes too far over the top.  The Jesus it shows is not merely happy—he’s a really odd duck, and his teaching methods are just plain goofy.  He seems more like a circus performer than the Son of God, an entertainer who relies on gimmicks to impress and to get some laughs.  Either that, or he’s just one great big kid. 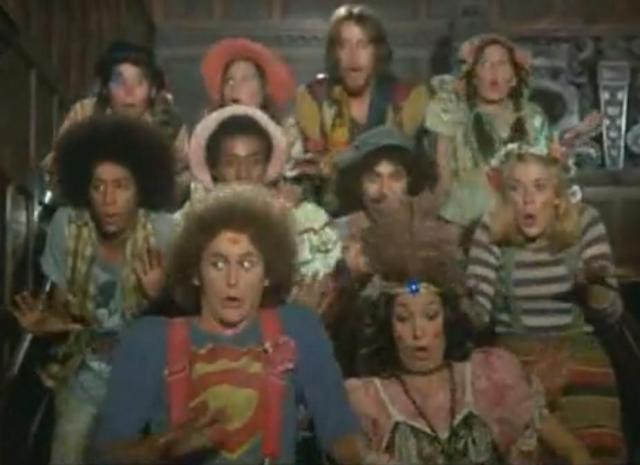 Godspell, though, wasn’t meant to show a historically accurate Jesus; it was meant to show a historically contextualized Jesus, which means that the externals, like costume and setting and interactions, were transposed, while the internals—the spirit of Jesus, his true core—were retained.  The content of the biblical Gospels is all there; its presentation is just different from what we’re used to.

The movie is subtitled “The Gospel According to Today”; it was meant to speak to the hippie subculture of the 1960s and ‘70s, to show them that Jesus is the timeless embodiment of all their ideals—peace, love, freedom, creativity, community, and expanded awareness.  Jesus’ message was as countercultural in first-century Palestine as it was in the 1960s and still is today.  I like how Tebelak was able to create that link and speak to the counterculture of his own time by portraying a Jesus who was the purest expression of what they longed for.  It blows my mind how Jesus’ message transcends time, place, and culture; it speaks to people where they’re at.  I mean, Tebelak adapts Jesus’ parables to a wacky, participatory, comedic context.  He sets Jesus’ ministry in junkyards and city fountains, atop skyscrapers and car hoods.  The soundtrack of his life is made up of kazoos and slide whistles.  And somehow, it works.

In 1 Corinthians 1:27, Paul writes that “God chose the foolish things of the world to shame the wise; God chose the weak things of the world to shame the strong.”  Perhaps Tebelak had this passage in mind as he was writing Godspell?  Its context is the crucifixion:  a God who claims to be all-powerful and triumphant, dies on a cross—that sounds foolish.  And it’s not the only thing that “wise” people don’t get about Christianity.  Turning the other cheek doesn’t make sense to those with rational retorts, like, “Well, then how can I defend myself against attack?”, or “What if we’re trying to preserve justice?”  It certainly doesn’t make sense to foreign policymakers.  And loving those who hate you seems just as crazy.  As does picking up your cross and crucifying your flesh, when you’d rather just live a life of comfort and ease.

When I think about the subversiveness of Jesus’ message, the famous photograph from the March on the Pentagon comes to mind…

What a ridiculous spectacle:  a flower in the barrel of a military rifle!  But what a powerful statement.  In a metaphoric sense, Jesus came to Earth to stuff flowers in our guns.  To preach a foolishness that is stronger than the wisdom of the world.  To utterly disarm us.  His goodness will one day destroy evil.  His peace will one day displace violence.  If his commands seem absurd or his vision naïve, that’s because they are meant to raise up a counterculture, a kingdom of people running against the current of self-interest, ambition, money, success, and security.

A very large part of Jesus really was peace, love, and

harmony.  Godspell reminds me that Jesus takes weirdos like us and makes us a part of his radical community.  Our initiation, though, comes through our admittance of our own sinfulness, which broke the primordial harmony God established, and our commitment to daily dying to self and rising in Christ, who alone, through his one-time sacrifice and eternal grace, can restore that harmony.  We should all embrace Jesus’ message of joy, but we also can’t forget his call to repentance and his holy wrath and his role as Judge.  The kingdom of God is completely new and set apart, so it necessarily excludes those who refuse to be made new and holy by conforming to its order.

What do you think of the movie Godspell?  Do you think that its picture of Christ compromises any of his core characteristics?  Is it hard for you to take seriously?  Does it speak to any of your heart longings?

What are the most countercultural aspects of the gospel today?  (How does it compare to the American Dream or, if you’re tuning in from somewhere else, to your culture’s definition of success and fulfillment, its picture of what is “normal” or right or admirable?)  What are some of the “foolish” or “weak” things God uses to confound the wise?

*If you haven’t already seen it, you can watch Godspell on YouTube, minus part 1, which shows the disciples being called away from their various jobs and stations in life to be “baptized.”

This entry was posted in Film and tagged All for the Best, countercultural gospel, feast of fools, flower power, foolishness of Christ, Godspell Jesus. Bookmark the permalink.