“There was some one thing that was too great for God to show us when He walked upon our earth; and I have sometimes fancied that it was His mirth.”  -G. K. Chesterton, Orthodoxy (1908)

Many people—like Chesterton, apparently—think of Jesus as a predominantly somber guy, one of those serious religious types with straight laces and a long face.  He was so serious, they believe, that he never cracked a joke or shared a laugh.  He was just a pious bore.

One would certainly get that impression from looking at any number of Byzantine icons—or really at any Jesus art produced by the church up until fairly recently.  Joyous events, like Jesus’ performance of miracles, his bestowing of blessings, and his resurrection, were depicted stoically.  Why medieval artists insisted on always downturning Jesus’ lips instead of upturning them, I don’t know. 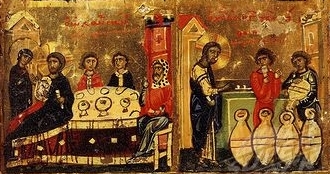 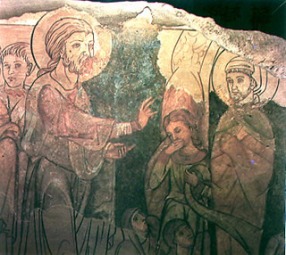 It wasn’t until the twentieth century, it seems, that we were finally able to see Jesus’ teeth, as he was then given, for the first time, a genuine, human smile.

The historical Jesus was one happy, humorous guy.  He used humor in his teachings and in everyday conversation and exemplified joy in his lifestyle.  People loved to hang out with him; he was invited to lots of parties, and young children were naturally drawn to him, so he couldn’t have been a gloomy Gus.  Yes, he had some serious things on his mind, and he was certainly not untouched by sorrow (I say in understatement), but I believe that his predominant emotion was joy, a joy that enabled him to transcend any sorrows that he did feel, because it was a joy rooted in his relationship with the Father.

And when I talk about joy, I’m not just talking about that sort of tender joy that radiates from his face in all those sweet Jesus, meek and mild paintings.  I’m talking about a joy that he felt in his belly, in a hearty, laugh-out-loud sort of way.

In Luke 7:31-35, Jesus contrasts himself to his cousin John the Baptist, an ascetic.  John renounced earthly pleasures and “sang a dirge,” so to speak, but Jesus played a flute and called for dancing.  Jesus lived with so much liveliness and mirth and spent so much time in the company of others that his enemies accused him of all kinds of unseemly conduct.  “The Son of Man came eating and drinking, and you say, ‘Here is a glutton and a drunkard, a friend of tax collectors and sinners.’  But wisdom is proved right by all her children,” Jesus says.  And while Jesus ate and drank and fraternized with outcasts, and traveled around with twelve of his guy buddies for three years, he had to have laughed, or else he wouldn’t have been human.

Elton Trueblood, in his book The Humor of Christ, says that “Christ laughed, and … He expected others to laugh. … A misguided piety has made us fear that acceptance of His obvious wit and humor would somehow be mildly blasphemous or sacrilegious.  Religion, we think, is serious business, and serious business is incompatible with banter.”

Trueblood gives two reasons for our failure to recognize the humor in the Gospels:

I’m not concerned with convincing you that God wants you to rejoice and be eternally happy.  If you’ve ever even casually perused the Bible, you would know that.  (To cite Pollyanna, one of my favorite childhood heroines, the Bible contains 800 “happy texts”—commandments to “be glad.”)  What I am concerned with is that the church comes to see that Jesus did occasionally tell jokes, and he did laugh, and his humor in no way compromises his sacredness.  And since Jesus is our behavioral model, we, too, ought to laugh and stop pretending like the more serious we are, the more devout we are. 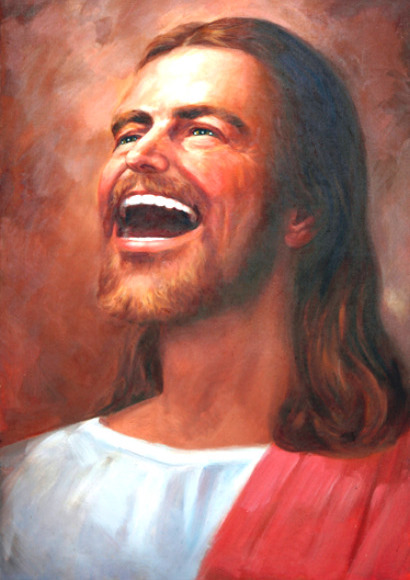 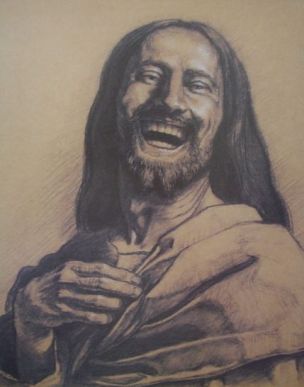 Today, the image of a laughing Jesus is immensely popular in the commercial realm; Christian stores are full of them.  (Churches, however, still seem to cling, for the most part, to artistic depictions of certain tragic Passion events in terms of what they display on their windows, walls, and altars, though some are making the shift, as I’ll show you later this week.)  The public’s preference for these happy Jesuses is telling of the way they prefer to relate to him—as a Friend who’s jovial and relaxed.

In the three “happy Jesus” artworks I posted here (all of which can be bought on T-shirts, hats, mugs, buttons, magnets, etc., or as framed prints), Jesus is just kicking back and loving life.  Do you think they’re over the top?  Do they look genuine or fake?  Which image of Christ inspires your devotion more:  a sorrowful image, or a joyful one?  Which brings you more comfort:  to know that Jesus cried, or that he laughed?

I don’t mean to dichotomize Jesus by asking these either/or questions, to suggest that he possesses only one single emotion or that any one image can address all aspects of his personhood.  To do so would be to ignore his infinite complexities.  I’m just trying to spark discussion.  As for myself, I feel somewhat ambivalent about these pictures.  They do appeal to me at some level, because they suggest to me a God who is “fun,” laid back, and approachable, a friend I’d like to spend time “hanging out with” in prayer.  Is that who God is?

At another level, I just think how funny they look, especially Haggerty’s.  But is that because I’ve been steeped in so much medieval and Renaissance art, or because they really are just ridiculous?

This entry was posted in Popular Art, Who is Jesus? and tagged funny jesus, laughing jesus, smiling jesus. Bookmark the permalink.