Christian blogger hmsarthistorian wrote a great post recently featuring the art of Kimberly Stephens. The post includes a transcript of his missiologically focused interview with her. Read it here.

Last October, Stephens exhibited a series of 18 paintings at the L&P Hutheesing Visual Arts Centre in Ahmedabad, India. The exhibition was called “A True Story,” and it documented, through symbols, different Christward-pointing stories from the Bible. But what is unique about the paintings is that they are acrylic and mehndi on canvas. Mehndi is the Hindi word for “henna,” a powder taken from the leaves of a henna plant and made into a paste, then applied to the skin as a form of decoration.

Mehndi body art is popular throughout the Middle East, Africa, and South Asia, especially in India. It is used for special occasions. For example, in traditional Indian weddings, the bride will have a henna party the night before the ceremony, during which her hands and feet are painted with fine-lined lacy, floral, and paisley patterns. Other occasions for use include pregnancies, births, circumcisions, and religious holidays. In the last two decades, henna has become popular in the West, too. I know I’ve seen “henna tattoos” offered at fairs and beach shops.

Stephens, who just recently returned to the U.S. after spending two years in India, was inspired by the intricate beauty of this traditional art form, but she innovated it in two ways: (1) She used henna narratively rather than simply decoratively, and (2) she put it on a canvas instead of on someone’s skin. Unlike traditional mehndi, Stephens’s mehndi tells a story (it’s not just there to look pretty), and it’s fixed in a permanent form (henna tattoos last only a few weeks).

All 18 paintings are beautiful and worth taking a look at individually. I could talk about The Promise, in which Jesus is pictured as the shining Messianic capstone to Israel’s waiting. Or Feeding 5,000, in which Jesus symbolically kisses an individual with his provision. In fact, Jesus can be seen in every one of these mehndi paintings, even the ones from the Old Testament. But today I’ll focus on just three of them: Birth of Jesus, Bleeding Woman, and Woman at the Well (Part 2). Each one has something unique to communicate about Jesus. 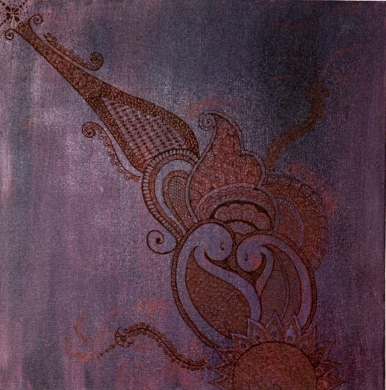 Kimberly Stephens, Birth of Jesus, 2010. Mehndi and acrylic on canvas.

1. Birth of Jesus: Jesus is God incarnate, the promised Messiah.

In this atypical nativity painting, Jesus, represented by a sun, is born at the bottom right of the canvas, and out of him is born a right relationship between God and man, symbolized by two peacocks facing each other. God the Father shines on the whole event through the star at the top left, which he used to lead the Wise Men to Christ, and indeed he is still illuminating the way to Truth even today, through the witness of his Spirit. I like how all the activity within the frame is sandwiched between God and God. I mean, really: God holds everything in this picture together; Father shines on Son, Son shines on Father, and both reflect the other’s glory. The positioning of the two divine symbols (sun and star) on opposite edges of the frame reminds me that Jesus is both “infant lowly” and exalted king.

2. Bleeding Woman: Jesus is our Healer.

The story can be found in Mark 5:25-34 (with parallel passages in Luke 8:43-47 and Matthew 9:20-22). A woman had been hemorrhaging for twelve years, which made her ceremonially unclean, a social pariah. Yet here we see her confidently pressing her way through the crowd (a crowd so heavy that Luke says it almost crushed Jesus) so that she can touch the hem of Jesus’ garment and be healed. There is definitely a sense of claustrophobia in the painting, of tightness and crowding, achieved by the many overlapping waves. But something intimate, something private, is happening amid this very public throng: the woman makes contact with Jesus, and something blossoms from this touch. Jesus restores not only her physical health, but her social health (her societal status), emotional health (dignity), and spiritual health (her standing before God). There is space, clarity, surrounding these two figures in the painting, because the woman can now see clearly that Jesus is who he says he is. Jesus is represented by a cross shape, which alludes to the blood that he would soon shed for the healing of the world.

Kimberly Stephens, Woman at the Well, 2010. Mehndi and acrylic on canvas.

In John 4:1-26, we see Jesus breaking yet another social taboo (speaking with a woman, and to a Samaritan woman, no less) in order to touch a life. Jesus is real keen on illustrations and analogies. Here, he takes the opportunity to turn a discussion about well water into one about eternal sustenance. He says, “Everyone who drinks this water will be thirsty again, but whoever drinks the water I give them will never thirst. Indeed, the water I give them will become in them a spring of water welling up to eternal life” (v. 13-14). The woman asks him for a drink of this water that slakes every thirst, and she receives it when she professes Jesus as Messiah and turns from her life of sin. The water in the painting comes down as a rushing wave, reminding me that Jesus satiates, refreshes, and keeps alive.

I think it’s beautiful that Kimberly Stephens found a way to honor a traditional art form while at the same time transforming it for the gospel. Henna has always been linked to joy and celebration, so Stephens uses it to convey the celebratory message of Jesus. A creative concept, to parse out the intricacies of Scripture through the intricacies of henna linework and geometrics. And how cool is it that she had the privilege of exhibiting her work in India, where hundreds of people, mostly Hindu, were able to see the gospel presented in such a way!

For other Christ-centered uses of henna, read the post on contextualized henna evangelism over at Indigenous Jesus. Seriously. Read it. It’s fascinating! Redemption history drawn onto someone’s palm and forearm, using a culturally relevant art form. Many women in Asia and Africa have come to know Christ as their Lord and Savior through such efforts and have even formed “henna groups” of their own to share the gospel with their neighbors.

1 Response to The Henna Gospel