This is my last post on Gethsemane, and I’d like to devote it to the presentation of some indigenous interpretations of the event.  In the Christian art of other countries, Gethsemane is treated far less frequently than other events in the life of Christ, like the nativity and the last supper.  (Madonna and Child portraits, though, tend to be the most common.)  But I was able to find these few pieces of art on the topic (in addition to the two contemporary paintings I discussed in a previous post—from Indonesia and Uganda).  Note how each artist gives Jesus native features, clothes him in native dress, and places him in a native environment.

Luke Ch’en, “Gethsemane,” 1928 (China). Source: Each With His Own Brush by Daniel Johnson Fleming 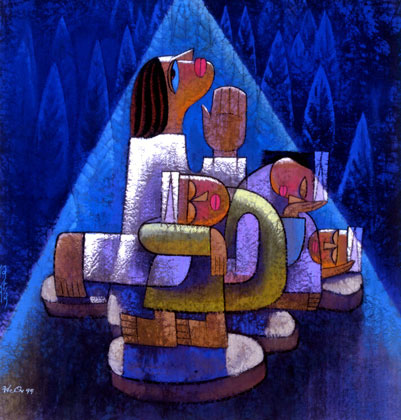 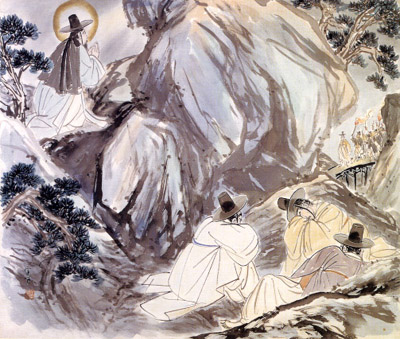 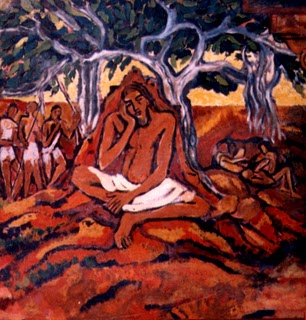 You may find it odd that these artists have chosen to depict Christ as Chinese, Japanese, and so on, but they probably find it just as odd that Americans depict him as American—white-skinned, wavy-haired, and blue-eyed—or cling instead to the Italianate Jesuses of the Renaissance.  What makes the American or European version of Christ any more valid than another country’s or people’s?  The majority of Christians have fixed Jesus in their minds as a Westerner, forgetting (or ignoring) the fact that he was Middle Eastern—a Jew from Palestine.  So is it right to displace him from his racial and cultural context so that we might adapt him to our own, and make him look just like ourselves?

This question is a loaded one, and I’m posing it now so that you can think about it for a while, as it is one of the main questions I hope to answer over the course of this blog.  For now, I just want you to start thinking about your picture of Jesus, and how much it is shaped by the culture you live in.  (And by “picture” I mean a visual idea, yes, but I’m also talking about your picture of Jesus’ whole person—personality, goals, values, and all.)