Gethsemane, Part 3: Through the Oil Press, or The Final Temptation

The Garden of Gethsemane is located at the foot of the Mount of Olives in Jerusalem (yes, it’s still there).  The name literally means “oil press.”

I’m going to fly away with a metaphor here, so bear with me, and reflect, if you will, on the image of Jesus as an olive, being pressed on all sides not only with thoughts of impending death and abandonment, but with the temptation to cease and desist from his mission.  We talk a lot about Jesus’ temptation in the wilderness, where he actually dialogued with Satan, but what about his temptation in the garden?  God’s plan for Jesus is just about to reach its climax, and it’s Jesus’ last chance to back down.  Satan knew that he would be particularly vulnerable at this time, so he attacks.  Here in the garden, Satan tries to crush the soul of the Lord—he runs a millstone over him, so to speak, putting pressure on him in an attempt to squeeze him dry.

In this brilliantly imagined oil painting by Ugandan artist Gloria Ssali, Jesus’ head seems to have exploded, releasing all his haunted thoughts so that they now dance before his eyes.  The thickly applied brushstrokes smother our hero, and the fiery, blood-red tones give off a sense of intense heat, appropriately hinting at what’s in store for Jesus in the coming week.  And what’s that around his head?  A halo (marking his divinity), or the imprint of a crown of thorns (marking his mocked kingship)?  Or maybe both at the same time.

And what exactly are we to make of all these shapes around Jesus’ head?  At the bottom left, they clearly take on human form.  Are they the embodied souls of the future saved, or the souls of the future damned?  —Or simply souls whose futures are yet to be determined by the decision Jesus is about to make?  Perhaps Jesus was given a glimpse of the future here in the garden, and in it he saw that millions of people, from generation to generation, would reject him, would not even understand his sacrifice.  Maybe Satan tried to persuade him that to submit to death by execution would be worthless and, moreover, just plain foolish, since the majority of people would ignore its significance anyway.  Maybe he saw Madonna hanging from a giant disco cross while belting out “Live to Tell” on her 2006 concert tour, or artist Andres Serrano urinating on a plastic crucifix and winning awards for it, or Marilyn Manson making statements like “If I found Jesus, I don’t think he would be all that different from me,” and so he just hung his head down and questioned the point of it all.

Maybe, on the other hand, the Jesus of this painting is conjuring up these human figures in an attempt to convince himself that his death would be worth it, in that it would provide a way for men to receive full joy and abundant life.  Jesus’ love for humanity is so strong that even if only one human soul could see God (the way he had seen God and lived with him and loved him for eternity) because of his death, he would go through with it.

Another painting that compellingly conveys the crushing weight of Jesus’ final temptation is Ni Ketut Ayu Sri Wardani’s Hatiku Sangat Sedih (Indonesian for “My heart is sad,” a reference to Mark 14:34). 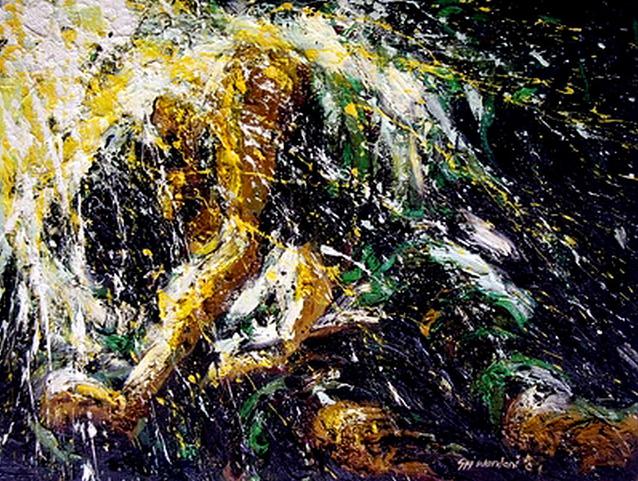 All of Wardani’s artwork is beautiful in its expressiveness, especially of Christ’s sorrow, and I look forward to sharing more of it with you guys in the future.  In this painting, the brushstrokes are frantic, chaotic.  They pound and pulverize Jesus, making him bend down under their force.  Wardani takes the opposite approach of Ssali in terms of color scheme, using cool colors instead of warm.  So instead of piping hot furnace, we get cold, dark abyss.  But the yellow (the only warm color on the canvas) might be said to represent a light of hope in this dark moment, a Father’s loving arms outstretched to his Son, trying to warm him in this time of trial.

So what other thoughts might have been coursing through the brain and bones of Jesus on that night?  Maybe he was tempted with thoughts of settling down, marrying, and starting a family, instead of cutting off his earthly life so early.  This is the stance Nikos Kazantzakis takes in his novel (and Martin Scorsese takes in his film adaptation) The Last Temptation of Christ.  I still don’t really understand how Jesus was both fully human and fully God, but I do know that he was both, and this is one of the great mysteries of Christianity.  But having said that, I wonder how his two natures (one human, one divine) interacted with one another.  Did his divine nature trump his human one, which is why he ultimately decided to do God’s bidding on the cross?  Did the two natures wrestle together internally all the time?

I’m a little bit wary of saying, like Kazantzakis, that Jesus just wanted to be a “normal guy,” because I believe that he had a very clear sense of who he was and what his purpose was on Earth, and that he had a real passion for pursuing the will of the Father.  (And having lived with the Father for all eternity, he would have known that heaven was infinitely more preferable than Earth.)  But if Jesus was fully human, as the Christian creeds proclaim, things like sexual intimacy and the desire to produce offspring (to experience the pride and joys of being a father) and a mere instinct to survive must have been very real temptations for him.  I wonder how much he thought about these things in those moments before his arrest, and how close they might have come to holding him back from his divine calling.

In Scorseses "The Last Temptation of Christ," Judas (Harvey Keitel) is a Zealot who tries to persuade Jesus to take up arms against the Romans.

Another possible temptation for Jesus might have been the temptation to take down the Romans and become the type of military ruler the Jews had expected him to be—what author Obery M. Hendricks, Jr. refers to as the “Zealot option” and which he suggests (in his book The Politics of Jesus) was Jesus’ most constant, most pressing temptation on Earth.  Jesus desperately wanted to deliver his people from political oppression, Hendricks says, and he harbored a holy hatred toward the Roman government and its exploitative tax structure, and, moreover, there were scores of Jews who offered him military backup and likely tempted him with visions of a free Israel.  But Jesus had to resist the urge to use military force if he was going to bring forth true spiritual liberation.  (If more Jews had joined his ranks, and if they succeeded in overthrowing the Roman Empire, his crucifixion never would have happened and universal atonement would never have been achieved.)

The last temptation of Christ was the temptation to opt out of being crucified, and it is a temptation that the church rarely acknowledges, even though its resolution was of cataclysmic import.  Jesus certainly had the power to escape death, and good reasons to do it, too.  But ultimately, he resolved of his own free will, and out of the love of his heart, to go and die for the sins of the world.  And so he came through the press of temptation with a greater strength, peace, and sense of purpose.  In my next post, I’ll take a look at the progression of his prayer in the garden, which led him to the decision to passively allow the Roman guards to arrest him just moments later, and then try him, scourge him, and kill him.

2 Responses to Gethsemane, Part 3: Through the Oil Press, or The Final Temptation