Jesus Invites Us to Touch, See, and Know

One of my favorite narrative paintings of Jesus is Caravaggio’s St. Thomas Putting His Finger on Christ’s Wound (1603). I like it not just because of its display of technical skill but because of its theological message. To me this painting says that Jesus is a person who welcomes the questions of honest seekers.

Thomas has always gotten a negative rap in the church. “Don’t be such a Doubting Thomas,” we say disparagingly to those who dare to ask those “but how do we know . . .” sort of questions regarding the Christian faith.

Sometimes, though, a little bit of boat rocking is precisely what we need. Shake things up a little by digging into the sacred texts of other religions and engaging in meaningful conversations with those who don’t share your religious views. Take on the necessary challenge of investigating the ground of your faith.

The apostle Thomas is one who rocked the boat. All the disciples had already seen the risen Jesus, but Thomas hadn’t, and he wasn’t content merely to float along on the claims of others. Let’s look at the biblical account of Jesus’s post-resurrection appearance to Thomas in John 20:24-29: 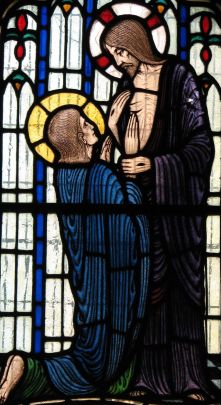 Now Thomas (also known as Didymus), one of the Twelve, was not with the disciples when Jesus came. So the other disciples told him, “We have seen the Lord!”

But he said to them, “Unless I see the nail marks in his hands and put my finger where the nails were, and put my hand into his side, I will not believe.”

A week later his disciples were in the house again, and Thomas was with them. Though the doors were locked, Jesus came and stood among them and said, “Peace be with you!”

Then he said to Thomas, “Put your finger here; see my hands. Reach out your hand and put it into my side. Stop doubting and believe.”

Thomas said to him, “My Lord and my God!”

A lot of Christians heavily discourage other Christians from questioning the tenets of the faith. I guess it’s because we think it’s somehow testing God or being heretical or disloyal. I had always thought that Jesus’ response to Thomas in this passage was a rebuke. In my mind, I had translated John 20:29 as, “Tsk, tsk, Thomas. It’s easy to see and believe.  But I’d rather people have blind faith in me, because that means their faith is stronger.” The more I study it, though, the more I think that Jesus is merely acknowledging Thomas’s declaration of faith, in a commendatory way (“. . . you have believed!”). Jesus does, after all, happily grant Thomas’s request for physical evidence. So while I used to think that Thomas’s statement (“unless I see . . . I will not believe”) was obstinate and uncalled for, I now see it as the words of someone who was honestly searching for Truth. 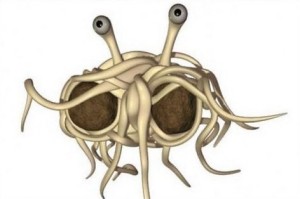 If someone came to you claiming that the Flying Spaghetti Monster had appeared to him, you would definitely want some proof. You wouldn’t just say, “I believe!” In a similar way, Thomas seeks confirmation of a claim that, let’s face it, was outrageous. A man had risen bodily from the dead? Yes, Jesus had said that he would do as much, and he had already performed countless miracles, but Thomas wanted to apprehend the Truth more fully, surely, and personally.

All the disciples, in their own ways, went through a phase of unbelief before coming to the point of professing confident faith in the risen Christ. Thomas was no different—he had to touch Jesus’s wounds before he could come to the point of professing Jesus as “my Lord and my God.” Generally Christians have been made to feel guilty, by their own community, for their unbelief. But I say don’t be afraid to acknowledge and wrestle with your doubts. As theologian André Resner says, “The struggle with God is not lack of faith. It is faith!”

Doubt is a stepping stone that leads us to Truth, and one that is sometimes necessary to fall back on so that we can step forward again with greater surety. But even though doubt is a necessary step in the process of faith formation, at some point, we have to move beyond doubt to decision-making time. Don’t just rest in a state of distrust and uncertainty for the rest of your life! How crippling and depressing. Stand for something. Pursue Truth with all your heart, mind, and soul, and when you find it, shout it out.

In his book The Gift of Doubt: From Crisis to Authentic Faith, Christian author Gary Parker claims (as you might guess from the title) that doubt is indeed a gift, because it means that you care enough to ask questions, and that you’re prepared to make your faith intentional:

If faith never encounters doubt, if truth never struggles with error, if good never battles with evil, how can faith know its own power? In my own pilgrimage, if I have to choose between a faith that has stared doubt in the eye and made it blink, or a naïve faith that has never known the firing line of doubt, I will choose the former every time.

So then why does Jesus bless those who believe without seeing? I don’t know. Maybe because in this passage, it’s coming time for Jesus’s ascension, so perhaps he is blessing future generations of people who will come to know him not by seeing him in the flesh, but by seeing him in the Spirit? Physical evidence was appropriate for the disciples because they had spent time walking with, eating with, and talking to Jesus’s physical person. Even if Jesus were to physically appear before us today, how would we recognize him? My point is, there are other ways to confirm the truth of Jesus today. Unlike Thomas, we have the witness of the Holy Spirit (John 15:26-27) and the saints whose eyewitness accounts of Jesus have been recorded in the Scriptures. (Of course, many will say that the reliability of internal promptings and of the Christian Bible is suspect, but that’s for another day.)

There are other ways to test the claims of Jesus, too, and for an introduction to those, I refer you to an article I wrote last year called “The Apologetic Posture,” a shorter version of which was published in the Fall 2010 issue of Virtuous Woman magazine. In the article, I address such questions as, “Can we ever know for sure that Jesus was for real?”, “But aren’t we supposed to have childlike faith?”, and “Why did Jesus sometimes refuse to give signs to those who asked?” For a heftier introduction on the topic of apologetics, I recommend the book I Don’t Have Enough Faith to Be an Atheist by Norman Geisler and Frank Turek, or, for those of you who are visual learners, the Holman QuickSource Guide to Christian Apologetics. (Lee Strobel’s The Case for Christ is also great if you’re interested solely in Jesus-related questions.)

ne last time at Thomas’s finger in the painting—he’s sticking it way in there! If he’s going to live with the conviction that Jesus is the Christ, he wants that conviction to be well-tested and well-informed. Readers, I invite you, too, to stick your finger into Jesus’s wounds, so to speak. Heck, wiggle that sucker around inside, probe, touch, press—whatever it takes for you to know for sure that they are real, and that he is the resurrected Christ.

What role has doubt played in your faith? What kinds of questions have you had to ask, or what are you asking now? Where’s the line between healthy doubt and unhealthy doubt, or is there one? Do you think the Thomas of Scripture should be reprimanded or admired for his demand for proof? If Christians are so sure of the truth, then why do they tend to be so hesitant or fearful of investigating alternative truth claims?

This entry was posted in Western Art and tagged Apologetics, Doubting Thomas, Faith and doubt, John 20. Bookmark the permalink.

6 Responses to Jesus Invites Us to Touch, See, and Know