One with Christ: Prints by Roy Henry Vickers

This is part 6 of a series on Christian art of the Pacific Northwest Coast. Read part 1 here.

The word “inspiration” comes from the Latin word in spiritu. The translation is “the breath of the creator coming into us.” We are inspired by the very breath of the one Great Creator, and it is no wonder that we are compelled to create whatever we can with the gifts that are given when the Creator’s breath comes into us. —Roy Henry Vickers

Roy Henry Vickers grew up in an Anglican Church community in the Tsimshian village of Kitkala, British Columbia. At age 12, he “accepted Christ into my heart,” but the relationship faltered, and he left the church more than once . . . only to return again with renewed faith. “Christ never forsakes you,” he said. “The Holy Spirit never stops speaking to you, convicting you.”

Vickers’s father was a fisherman of Tsimshian, Haida, and Heiltsuk blood. His mother was a British schoolteacher. His mixed heritage influences his art style, which tends to blend traditional Northwest Coast abstraction (he studied at the Gitanmaax School of Northwest Coast Indian Art in Hazelton, BC) with European realism (as in his landscape paintings).

Of special interest to me are his Head of Christ prints. Here are two of them: 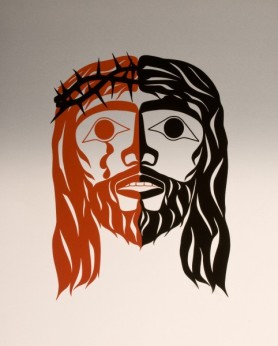 Of these, he wrote the following:

During the 1970s, I was struck by the message of Christianity and the culmination of religious celebrations that happen each Easter. I wanted to remind people that Easter was more than bunny rabbits and Easter egg hunts, and so I painted a number of renditions of the face of Christ.

The Easter of 1985 found me again wanting to create a work that would leave a lasting impression and provide the viewer with cause for meditation. I reworked an older painting showing the face of Christ in red, with a crown of thorns and a face of a man in black. The basic thought behind this creation was that if we identify with Christ in his crucifixion and death, we also acknowledge his resurrection and everlasting life.

During the creation process, Vickers drew inspiration from Scripture. One edition, for example, has inscribed at the bottom “John 15:13” and “Hebrews 9:28.” The serigraph above was inspired by 2 Timothy 2:11: “Here is a trustworthy saying: If we died with [Christ], we will also live with him.”

Vickers’s two prints depict in a unique way this relationship of opposites, showing that there are two shades to the story of the cross: death, and life. In terms of color, he uses only black and red—the two traditional colors of Northwest Coast art. These colors don’t carry any symbolic meaning in that tradition, but in Western thinking, black is often associated with sin and/or death, while red is the color of lifeblood and passion.

Vickers has stated that the right half of Christ’s face is actually the face of mankind. It’s his way of reminding viewers that Christians are joined together with Christ in his death and resurrection. With Christ, we look ahead toward the prize, anticipating our being raised.

This two-color Head of Christ design was used as the basis for his lectern carving at St. Andrew’s Cathedral in Victoria, British Columbia—a church whose Native art I will visit in the final post in this series, coming up soon.

For other Vickers prints on biblical or Christian themes, see The Creation of Eve, The First Horseman of the Apocalypse (Rev. 6:2), and St. Peter’s, Kitkatla.

Vickers’s Eagle Aerie Gallery in Tofino, British Columbia, is a traditional Northwest Coast longhouse with a carved and painted cedar plank exterior and doors of beaten copper. He built it in 1986 with the help of family members and master carver Henry Nolla.

5 Responses to One with Christ: Prints by Roy Henry Vickers